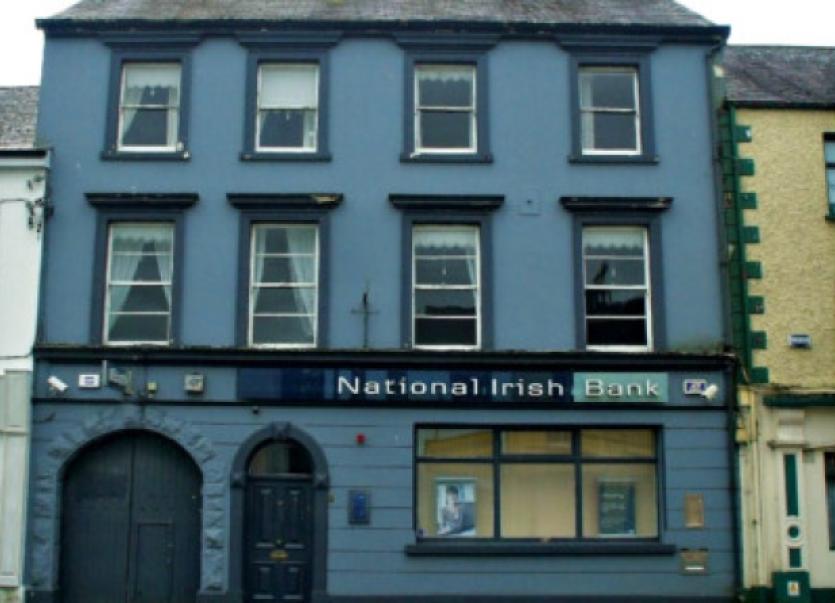 There are big plans for the National Irish Bank building, Ballinamore as it has been granted planning to become a licenced premises.

There are big plans for the National Irish Bank building, Ballinamore as it has been granted planning to become a licenced premises.

Leitrim county Council has this month granted planning permission for a change of use of the premises formerly known as National Irish Bank to a licenced premises.

For almost three years the National Irish Bank has been lying idle on Ballinamore’s Main Street. The closing of Ballinamore’s NIB in 2010 was seen as an end of an era, as this bank was the oldest in Ballinamore, dating back to 1880. Not only was the closure of the bank an inconvenience to NIB customers, but it saw one more empty building occupying Ballinamore’s main thoroughfare.

But Aughnasheelin man Osman Costello, who currently runs Lawrence’s Bar on Main St, Ballinamore has big plans for the vacant commercial building. He has succeeded in securing planning permission from Leitrim County Council to change the dominating premises on the town’s main street into a new bar.

The council have granted conditional planning for the creation of a public bar and provision of an off-licence with a new front entrance, replacement of existing windows in the front elevation and extension of existing buildings to the rear of the property to provide kitchen, staff, toilet and storage facilities. Permission has also been granted to provide an open smoking area, 3 car parking spaces, and all ancillary works necessary to complete the development at Stradermot Td, Main St, Ballinamore.

The large three storey mid terraced bank and commercial property has residential accommodation on the upper floors. The ground floor of the property was used for bank purposes while the remainder was for residential use. There is a small enclosed yard to the rear with shared access via an archway from the Main Street.

Despite a number of pubs closing around the county since the recession, this news of a new bar, certainly bucks the trend. Ballianmore has been fortunate not to see any pub closures in recent years, a new licenced premises The Standing Stone Hotel opened recently in the building of the former McAllister’s Hotel on High Street.

The new lease of life for the bank will also be promising news for the other former local NIB. The bank in Carrick-on-Shannon and Boyle have been sold, the Drumshanbo bank is still for sale or for let.