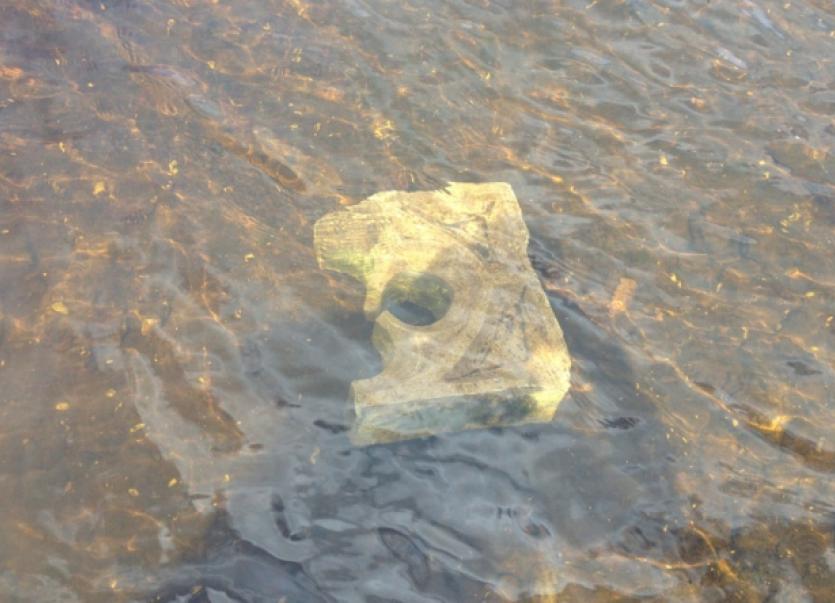 A priceless Medieval window surround stolen from Church Island over two years ago has been found dumped near the shoreline of Lough Garadice.

A priceless Medieval window surround stolen from Church Island over two years ago has been found dumped near the shoreline of Lough Garadice.

The discovery was made by local man, Patrick Bradley, earlier this week. Mr Bradley had reversed a piece of farm machinery to the lake shore to wash it down at Keelrin, near Newtowngore when he noticed the stones lying in the shallow water of the Lough. He contacted gardai to report the find and the pieces of hand carved masonry have since been removed.

The Medieval masonry was reported stolen just two weeks ago after a regular visitor to Church Island realised that the ruins of an ancient abbey had been desecrated. However, it is clear from photos taken on the island a few years ago, that the window surround has been missing for at least two years.

Local councillor, John McCartin, who also attended the scene of the find said that it was clear from the condition of the masonry that the pieces had only been recently dumped in the water.

“They could be clearly seen because they were very white, which they would not have been after a few years under water,” he told the Leitrim Observer. “It is clear from the pieces that they have only been recently dumped on the shoreline as the stone is very white and there is moss to be clearly seen, moss which only would grow on a dry stone wall.”

The Ballinamore Area councillor added that he believed that getting details of the stolen artefacts out into the public domain had played a key role in their recovery.

“These artefacts are missing for over two years so it is not guilt which has brought about their return, but fear as a result of the media coverage this story has gotten,” he said.

“It is wonderful that this priceless piece of our history has been recovered but it is appalling that anyone would attempt to desecrate such an important archeological site.”

Adrian Smith of Smiths’s Monumentals, Ballinamore has offered to re-instate the surround, but the final say on its restoration will rest with the National Monuments Service in the Office of Public Works.

When contacted by the Leitrim Observer about the find, a spokesperson for the Service confirmed that a Garda forensic team had recovered what “appears to be a window or part of a window from the lake”, but said they were not in a position to make any further statement at this time.

Gardai in Carrick-on-Shannon are appealing for anyone who may have noticed any suspicious activity in the vicinity of Lough Garadice in recent days to contact them on (071) 9620021. The cut-stone musket holes stolen from a battery on nearby Slasher Island, have yet to be recovered.