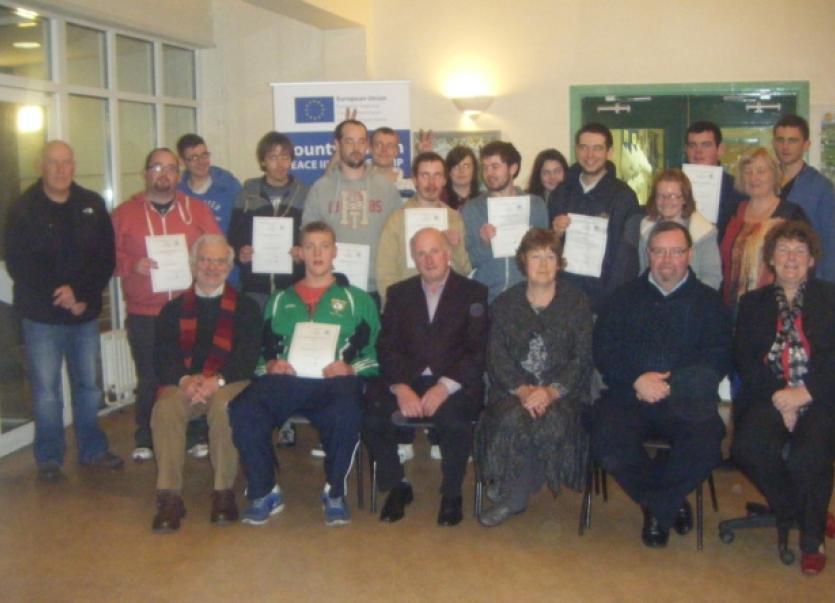 A unique programme of change for young people in Leitrim has just concluded in Lough Allen.

A unique programme of change for young people in Leitrim has just concluded in Lough Allen.

After trips to Northern Ireland and around Leitrim, followed by lots of discussion and debate, those involved have been questioning each others’ attitudes about protestants and catholics, different cultures, new communities and different political allegiances.

On November 15 last, these 20 young Co Leitrim people were presented with their certificate of attendance by the Chairperson of the Lough Allen Centre, Cllr Francis Gilmartin.

In turn, the group presented a selection of their art work to St John’s Heritage Centre in Drumshanbo.

Cllr Gilmartin thanked Paul Kirkpatrick for his support for the programme and commended all the participants. He also acknowledged the support of the PEACE III Programme through the European Union’s European Regional Development Fund managed for the Special EU Programmes Body by Leitrim County Council on behalf of County Leitrim Peace III Partnership.

Fellow local councillor, Enda McGloin said the project was a wonderful opportunity for young people to complete such an initiative and hopefully come to a better understanding of the peace process and all it involves.

The group is part of Leitrim PEACE lll Embracing Change project, and are committed to widening their perspectives on Irish society and politics.

It also provided an opportunity for the young people to share their experiences of conflict and visit communities in Belfast and Omagh.

The project involved conflict resolution training, physical activities, communications skills and, a first for many, the opportunity to express themselves through art.