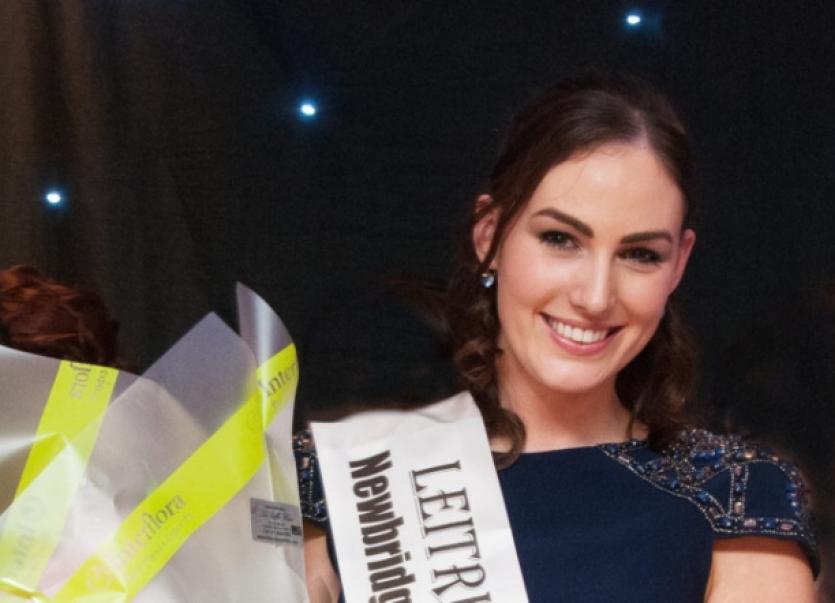 Zara the daughter of business man John Healy and Caroline, was chosen from nine stunning Leitrim ladies who entertained the large crowd in The Bush Hotel. The huge crowd were also entertained by performances from Crossan School of Irish Dancing, Sean nós ar an tSionnain and Singer Gavin Sweeney (who won Northwest Got Talent). €800 was raised through a raffle for St Ciaran’s Services, Summerhill.

The prestigious event was graced by Rose of Tralee CEO Anthony O’Gara and his wife Oonagh. Mr O’Gara commended all the amazing roses on how well they did and how proud they did their county. He also announced that the Rose Tour will be coming to Leitrim next August with all 32 international roses!

Escort of the Year 2013 Jonny McGailey was on hand to escort Edwina Guckian on her final night as the Leitrim Rose. 2013 Leitrim Escort Mark Irwin escorted the roses on stage for the night.

Speaking to the Leitrim Observer after her selection, Zara said she was shocked and delighted to be the new Leitrim Rose. She said her friend had put her name forward, as she was a bit reserved about applying as she thought “I don’t have a talent!”

She explained the entire day of individual interview and group interviews with the judges on Sunday, which she said was “relaxing.” The nine ladies had their hair and make up done before they graced the stage that evening.

Zara said she was nervous about her on stage interview, but was delighted it went by “in a blur.” Zara lives in Dublin Monday to Friday, working in the Three mobile store, but she returns home every weekend. She often helps out in her father’s business Flynn’s Bar and Takeaway, which sponsored her for the Leitrim Rose.

Zara said the whole experience was amazing, meeting new girls and she is delighted to have made her family and friends proud of her.

Zara is looking forward to the Regional Final of the Rose of Tralee in Portlaoise on May 30. She hopes to represent Carrick-on-Shannon and Leitrim to the best of her ability. She has already been inundated with best wishes from the community and said she understands the importance of her role as Leitrim Rose. With only 6 out of 29 counties able to make it through the Regional final, Zara knows it will be tough to get to Tralee, but despite that she is excited that this year Leitrim will host the Rose Tour of Ireland for two nights and she will be proud to show all the roses around Lovely Leitrim.