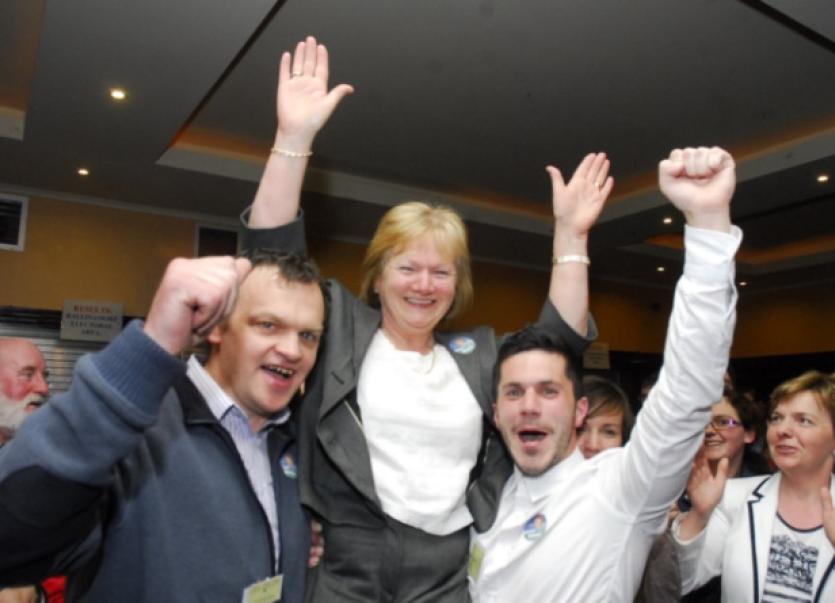 With four less places around the Council table there was always going to be stiff competition for the reduced number of remaining seats and in the Manorhamilton Electoral Area, just three former councillors retained their seats in the election.

With four less places around the Council table there was always going to be stiff competition for the reduced number of remaining seats and in the Manorhamilton Electoral Area, just three former councillors retained their seats in the election.

Fianna Fáil councillor, Mary Bohan, was the best performing of the returning councillors, securing 812 first preference votes and securing her seat on the third count.

“I’m over the moon to have secured another term, absolutely delighted,” she told our reporter.

“I knew at the outset that I had to get a substantial number of first preference votes in order to retain my seat and the hard work has paid off,” she added, paying tribute to her “excellent” campaign team and supporters.

“I think I had a bit of an advantage with my work record and the fact that I had very good candidate recognition and I also worked very hard on my personal canvass. I really made a point of meeting as many of my constituents personally as possible,” she said.

While she admits that there was some anger on the doorsteps, Cllr Bohan said that, “thankfully, none of this was directed at me. I felt that people really engaged with me on the doorsteps but it is clear that there is a great deal of anger, of frustration and suffering out there and there is still a significant amount of work to do for our constituents.”

Having worked for 35 years on behalf of the people of north Leitrim, Cllr Bohan said that she had lost none of her enthusiasm for the job and the challenges it brings.

“I see my role as councillor as a real honour and I am proud of my many years of service on the Council. I am now the longest serving councillor on Leitrim County Council. It is a very different county from the one which first elected me in 1979, but I look forward to continuing to serve the people of my constituency to the very best of my ability over the next five years,” she said.

Fine Gael councillor, Sean McDermott, who most recently served as Chairperson of the outgoing council, told the Leitrim Observer that there was a real sense of relief to have the election behind him once again.

“I was delighted to get across the line at the end. The campaign itself was very stressful because I was in a bigger area and nobody knew how that would work out,” he admitted, thanking, his family, his campaign team, supporters and voters for their help over the last few months.

“In my previous two elections I had gotten a fairly high first preference vote but in this one I was very dependent on transfers and it is a very think line between victory and defeat.

“There is no doubt that I have seen people suffering. Too much money is being taken off ordinary people who are now being forced to pay too high a price to keep the country going,” he acknowledged.

“I deal with reality and I believe you have to call the shots as they are and I know that the policy at national level has really played a part in the downfall of Fine Gael councillors in this election,” he said.

“I feel very sorry for those who lost their seats this time, not just my colleagues in Fine Gael, but everyone who lost out. We have worked very well as a Council over the past five years and we have been able to really deliver for the people of Leitrim.

“Things are obviously going to be different this time and Fine Gael has to stand back and see where we are. The people have spoken and the question of who will take control of Leitrim County Council is something that we will have to reflect on and study. There is no point in jumping in to secure a power sharing deal”.

He said he was committed to working for north Leitrim and developing tourism as a priority, committed to travel to the Ballroom of Romance before the end of Summer and committing to ensuring that Sean MacDiarmada was properly honoured in his home county in 2016.

Fellow Fine Gael councillor, Frank Dolan, acknowledged just how close it had been for his campaign.

“It certainly was a long day and I just scraped through by the skin of my teeth. I’m very, very grateful to all the people who voted for me, not just first preference but second and third as well which were very important for me in the later stages,” he told our reporter following his election on the sixth count.

“Being critical, the government didn’t make it easy for us. We got the kicking, I heard it described as a tsunami. That’s where we are, tough decisions have been made but certainly they didn’t help us” added the Fivemilebourne man.

Cllr Dolan acknowledged that, with the concern over his seat, he had not had a chance to look at the actual make-up of the new, reduced Council.

“To be honest I haven’t looked at (the make-up of new Council) because for a long time today I didn’t think I would be part of that. There are lots of new faces coming in, how that will balance out I’m not in a position to say,” he admitted.

“As a Councillor you try to do your best for your local area. One thing I must say, in the past, members of Leitrim County Council, generally speaking, have left politics outside the door and they have worked as a unit for what they deem to be best for the county whether that be north Leitrim or south Leitrim,” he said.

“The electorate may not be happy with all of that but that’s the way I’d like to see it work in the future. If we don’t work together we won’t deliver,” he warned.