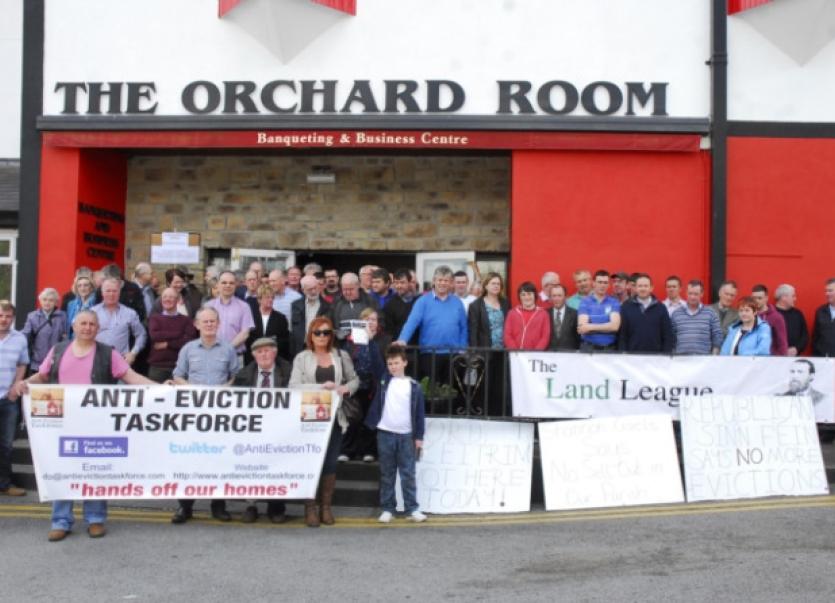 It is only just a few minutes long but a video of Carrick-on-Shannon hotelier, Joe Dolan, has gone viral racking up thousands of views since it was put online late last week.

It is only just a few minutes long but a video of Carrick-on-Shannon hotelier, Joe Dolan, has gone viral racking up thousands of views since it was put online late last week.

The video was uploaded following a protest at an auction set to be held at The Bush Hotel last Friday.

Over 120 people turned up at the auction in a show of a support for a Roscommon farming family whose property had originally been listed for sale on order from their bank.

The Leitrim Observer understands that the previous Wednesday the Auctioneer, REA Carthy, had withdrawn the property for sale following communication with the family.

Concern over the possibility the property could still be considered for sale led to a massive protest with neighbours, friends and family travelling from Croghan and Drumlion to show their support.

Speaking before the auction, the auctioneer, Seamus Carthy, pleaded with those in attendance to extend him and the other bidders present the same respect he had shown them in explaining the situation. He insisted that the property, which was the subject of the protest, was not included in the day’s auction list and said that it had been withdrawn after consultation with the family involved.

However a spokesperson for the family said they had been in contact with their bank and had been told that the sale would be proceeding.

At this stage, protestors, bidders and auction staff had crammed into the small conference room, overflowing the area, and into the lobby of the function room.

Addressing the crowd, Bush Hotel owner, Joe Dolan said that he had been unaware of the content of the event until the previous evening.

He said that he and his family were “very embarrassed” to be in such a situation and noted “such an event may be common in the Shelbourne Hotel but they are not in the Bush Hotel and never will be,” he said to massive applause.

He acknowledged the legal contractual obligation he had to the auction organisers but said he felt that this had been superceded by health and safety concerns arising from the sheer number of people in the conference room.

Adding that he had contacted the gardai and fire authorities to voice his concerns, Mr Dolan said he had received their support to cancel the auction.

“I consider this room unsuitable and I am cancelling the auction,” he said before asking everyone to exit the building.

He then invited the protestors upstairs where he had provided complimentary cups of tea, coffee and sandwiches.

Mr Dolan later pointed out that this was a small rural community where people shared each other’s pain and happiness.

“The community rallied around my family when we had our own tragedy,” he said adding “Shame on us if we did anything else.”