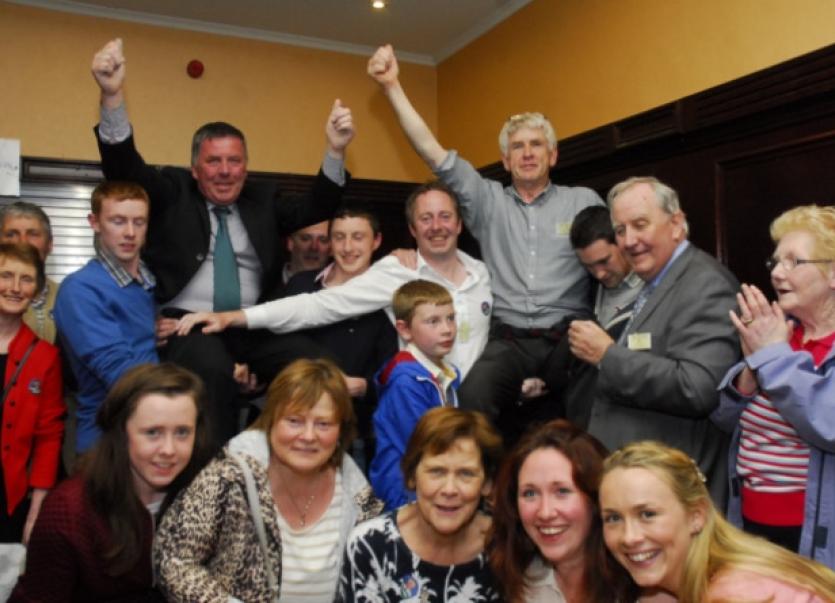 As expected Carrigallen’s Paddy O’Rourke and Fenagh’s Caillian Ellis were the first two elected in the Ballinamore Area. Both credited their “local approach” to the success in the polls.

As expected Carrigallen’s Paddy O’Rourke and Fenagh’s Caillian Ellis were the first two elected in the Ballinamore Area. Both credited their “local approach” to the success in the polls.

O’Rourke said, “Because of the change to electoral areas and the extra competition with the addition of three sitting councillors from the former Dromahair electoral area in to the mix I always knew that it would be a tough campaign. I officially knocked on my first door in this campaign on April 7 and it has been hard work since then.” He paid tribute to everyone who supported him.

“I am in the unusual situation where every first preference is vital as I am on the edge of an electoral area with my back to the wall of Cavan and Longford.

“I think it is crucial to think and act locally. There is really very little that a councillor can do to sort issues such as the banking crisis or the state of the economy but we can work to sort local issues such as the state of roads, safety concerns and medical cards or SUSI applications. Regardless of the party politics it’s local issues that have to take precedence. This will be a very difficult council going forward but I am looking forward to continuing to represent the people of my constituency.”

Caillian Ellis said, “This has been a very stressful eight weeks but I feel very privileged to be returned to Leitrim County Council by the people of the Ballinamore Area. I will not let the people of Ballinamore down.” Cllr Ellis said that he had been left 200 votes down through the expansion of the Ballinamore Area. “But I was lucky, other councillors felt even more pressure. It was a very difficult election but all I did was keep canvassing, keep working, that was all I could do.”

Ellis kept his canvass “simple” saying, “I think it’s a mistake to loose yourself in national issues. I pride myself on being approachable and to working hard for everyone who comes to me and I will continue to do that.” He thanked his campaign team, supporters and family, for their hard work.