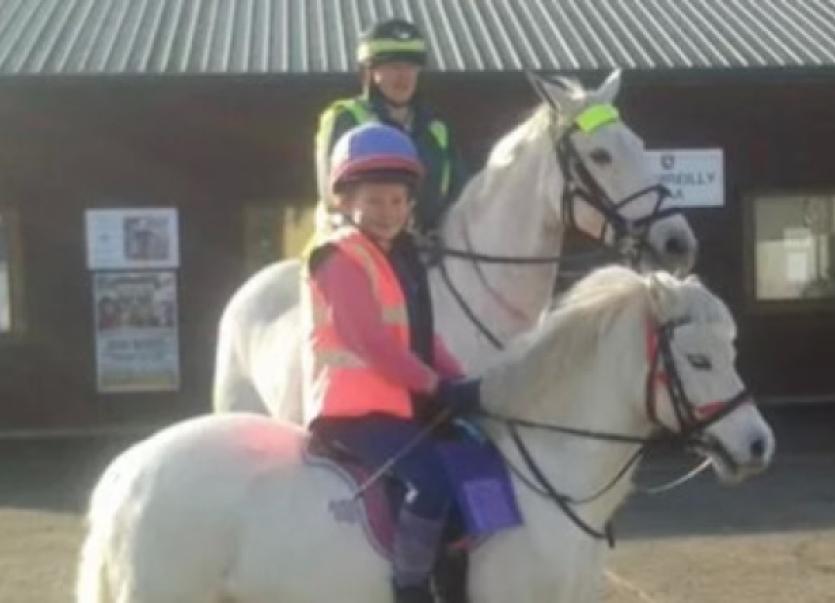 On Sunday, November 16 a practice day was held for ThreeCounties Trec at the beautiful Drumcoura Lake Resort, Ballinamore.

On Sunday, November 16 a practice day was held for ThreeCounties Trec at the beautiful Drumcoura Lake Resort, Ballinamore.

The day started bright and early with two hours obstacle practice in the huge indoor arena in Drumcoura.

There was a great sense of fun as people tried to negotiate the S Bend, the Slalom and the Low Branches, to name but a few of the obstacles that were available for participants to attempt/practice, much to the amusement of Ron Weis – owner of Drumcoura Lake Resort.

After the horses were untacked and given a well earned rest the riders went to the map room.

The Saloon in Drumcoura City was the map room for the day and everyone enjoyed a break and had a quick chat while they traced the route that was to be ridden.

Following a short break the horses were remounted, all the riders wearing their high viz clothing and map in hand, set off as a group to see if their map reading skills were up to scratch!.

In glorious sunshine, which was very surprising for November, 17 riders, including two juniors, rode a route that was nine kilometres long and took in some of the beautiful scenery around Drumcoura lake Resort, including an old graveyard and circling around a beautiful lake.

It was great to hear the riders comparing notes and planning ahead to what would be the next turn and how far away it would be, not to mention people looking at the map up-side down, with no idea where they were!

There was riders there from Counties Fermanagh, Leitrim, Cavan and Roscommon.

The riders returned back to Drumcoura at 3pm, tired, but very happy – for some this was their first experience of Trec and having spoken to some of the more experienced Treccies they cannot wait for more.

ThreeCounties Trec is holding a two phase competition in Moorlands Equestrian Centre in Drumshanbo December 7 if anyone would like to come along and find out more!