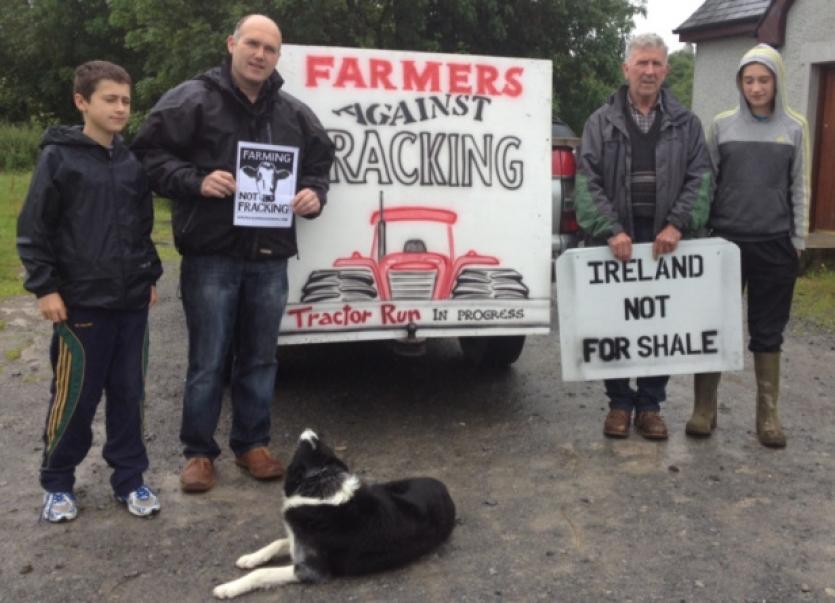 Tamboran are proposing to drill samples from the rock in the quarry in Belcoo, which will be sent to the USA for further analysis.

They have already erected security fencing at the quarry on Gandrum Road, Co Fermanagh and have sought a High Court injunction against protestors at the site.

In an emergency meeting called by councillors last week in Carrick-on-Shannon councillors stressed the need for unity between all parties in the fight against the introduction of hydraulic fracturing both north and south of the border.

Approximately 90 anti-fracking campaigners staged a peaceful protest outside of the Council offices in Carrick-on-Shannon for the duration of the meeting.

The ensuing meeting of the 18 members of Leitrim County Council resulted in a vote to not only condemn the actions of Tamboran, but also calls to show their support for the people of Fermanagh by a unanimous agreement that councillors will visit the protest site in Fermanagh over the coming days.

Most importantly, councillors unanimously supported a resolution by Fianna Fáil councillor, Mary Bohan, calling for: “Minister for Communication and Natural Resources, Alex White TD and An Taoiseach, Enda Kenny TD and the Government to intervene with UK Prime Minister, David Cameron; First Minister of Northern Ireland, Peter Robinson and Deputy First Minister for Northern Ireland, Martin McGuinness; and the Stormont Executive to immediately stop all drilling works being carried out by Tamboran and their agents.”

This follows on from a ban agreed by Leitrim Councillors earlier this year which saw hydraulic fracturing prohibited under the County Development Plan.

Putting forward her motion, Cllr Bohan said that she believed people had been let down at national level by the politicians in both Northern Ireland and the Republic.

She stressed the need for solidarity now at all levels.

In a meeting on Friday, Cavan County Councillors agreed to pass a simliar motion.

Cavan councillor, John Paul Feeley, said the motion is aimed at preventing Tamboran from going ahead with invasive drilling works or any other exploratory works in Northern Ireland.