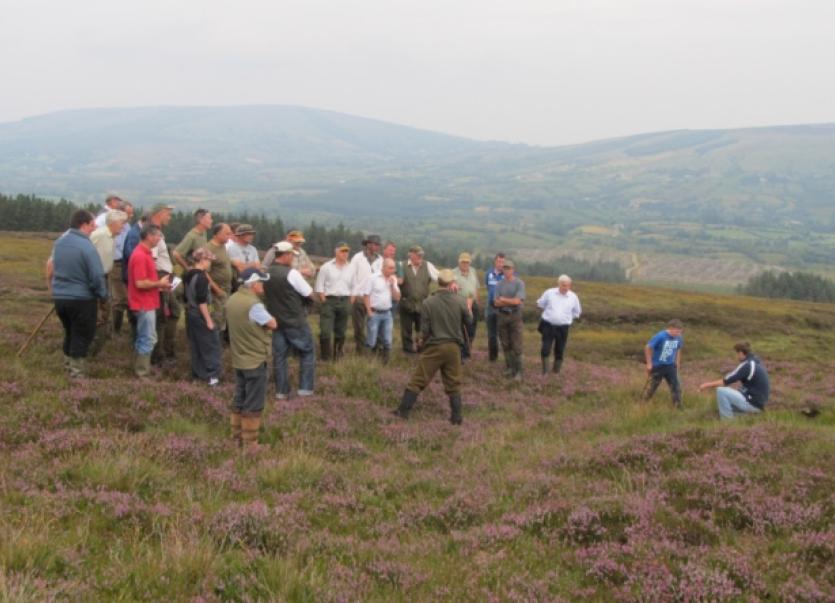 In 2007, members of Glenfarne Gun Club decided to see if something could be done to help stop the decline of the Red Grouse on Boleybrack Mountain, just above their village.

In 2007, members of Glenfarne Gun Club decided to see if something could be done to help stop the decline of the Red Grouse on Boleybrack Mountain, just above their village.

These tentative first steps were the start of a rather unexpected and unique journey that continues to make steady progress every year. Seven years later, and one could now argue that the Boleybrack Red Grouse Project is one of the best, if not the best, uplands wildlife project in the country.

The Glenfarne Gun Club first secured a grant from the Heritage Council in 2007 to draw up a management plan for the mountain.

The area they were initially concerned with was the Leitrim side of the Boleybrack summit. The area is a commonage used by a number of active sheep and cattle farmers grazing their livestock during the year.

The mountain is also a Special Area of Conservation (SAC) and is fringed by several large conifer plantations. Seven years later and again with Heritage Council grant assistance, the already very successful Boleybrack Management Plan is receiving a thorough review which wishes to consider the views and ideas offered by the local community and upland stakeholders.

Irish Red Grouse are characteristic of heather moorland. Older Glenfarne residents were able to recall a time when Red Grouse were regularly heard calling on the hillside, maybe especially at dawn or dusk, when they were out footing turf or gathering sheep. But slowly the grouse declined, probably as a result of 4-5 separate issues that combined to limit the breeding success of local birds.

The challenge for the project was to try to find a management system that was acceptable to all the stakeholders involved.

The local farmers obviously want their livestock to continue to graze the mountains in a secure environment and in a manner that does not hamper their obligations under their respective Single Farm Payment Plans. Other local people want to be able to walk up the public right of way that extends up and over the mountain, as far as Dowra. The National Parks and Wildlife Service (NPWS) had given commitments to Europe to maintain the habitat in this designated site. And Coillte were anxious that uncontrolled fires would not damage their nearby timber crops.

The Gun Club established a project Steering Group, with representatives of the local farming community, NPWS and the Golden Eagle Trust and set about implementing its original management plan and delivered this in their spare time and in a voluntary capacity.

As the project grew and their initial efforts bore fruit as Grouse numbers increased, the Gun Club set about trying to establish a more formal project approach. With funding and advice from the National Association for Regional Game Councils (NARGC) and NPWS, a full time project manager position was established and John Carslake was appointed in March 2012. John works for the NARGC and now carries out his day to day role in close co-operation with local landowners and commonage shareholders.

Over the years numerous local representatives, TDs, interested groups and specialists have visited the Boleybrack Grouse Project, as much to see a successful partnership (between farmers, hunters and wildlife people) as to see the practicalities of the Grouse management itself. Indeed, the visit of Minister Deenihan to see the Boleybrack Grouse Project in October 2012 was a significant boost to the project’s profile. The Boleybrack knowledge is sought by other upland management projects all over Ireland.

The local Steering Group are continuously assessing and improving on agreed responses to heather management, controlled burning and how best to incorporate the current livestock grazing regime into the Department of Agriculture’s rules on Good Agricultural and Environment Condition (GAEC) and parallel rules on Cross Compliance with wildlife Directives.

The work being done has also highlighted the impact of the Heather Beetle, in destroying many stands of healthy heather on the hill.

Some similar patches of grey dead heather were mistakenly attributed to acid rain, nuclear fallout from Chernobyl! and a variety of other causes, in other upland areas, from Donegal to Galway, over the past decades.

Only in the last month, the important and rather unique collaborative approach to the management of Boleybrack Mountain has been underlined by the prestigious invitation from FACE (the primary European hunting forum) to deliver a project presentation at an important conference with European decision makers, including a key note address from Janez Potočnik, European Commissioner for the Environment.

The aim of the event is to outline the positive contribution of its members in terms of wildlife management. The conference takes place in Brussels on 23 September 2014.

The Conference will have a comprehensive agenda featuring high-level speakers from EU institutions, NGOs, hunting and other conservation stakeholders discussing future actions to conserve our wild birds.

The fact that a project started by a small group of people from Glenfarne, is now heralded as a best practice example by our European peers, is recognition of the importance of this inclusive community approach on Boleybrack Mountain.

The challenges facing the management of mountains, utilised by commonage shareholders, is a key aim of the forth coming Common Agricultural Policy. The current collective approach used in the Boleybrack Grouse Project should benefit the local active shareholders in trying to secure a favourable outcome with Department officials, as regards farm payments.

And it may also be a valuable template for elsewhere, in trying to resolve the ongoing discussions between farm representative bodies and the Department over agreed management proposals for mountain commonages across the country.

At a time when the future of small family farms is under increasing pressure, from Irish policy makers, it is vital to highlight the role the land management of small farmers can play in rural development and supporting local communities, from an Agri-food, tourism and wildlife perspective.

Fortunately, there is now a very practical and demonstrable example of that farming role on a rather quiet Leitrim hillside, called Boleybrack.