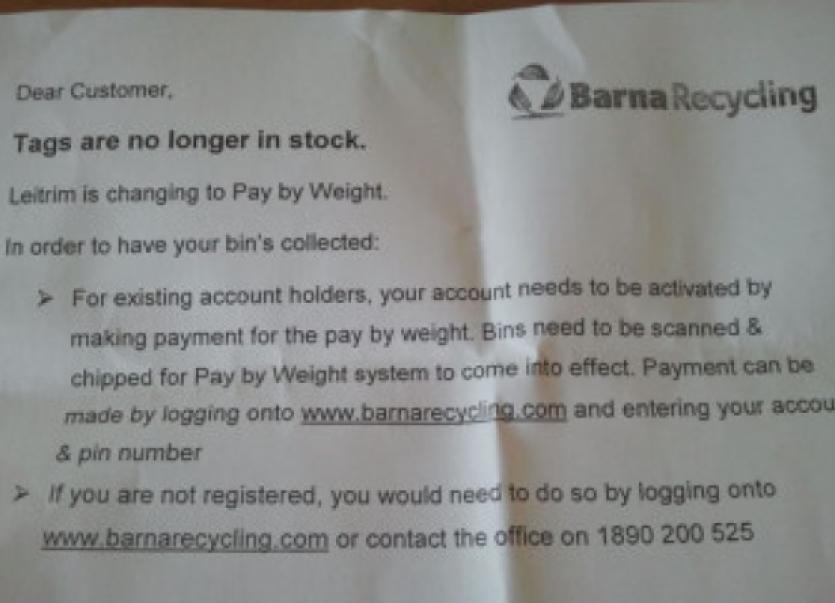 A spokesperson for Leitrim County Council has confirmed that the pay by lift, or tag system, of waste collection remains available for use and will do so until December 1.

A spokesperson for Leitrim County Council has confirmed that the pay by lift, or tag system, of waste collection remains available for use and will do so until December 1.

Confusion arose last week after some customers of Barna Recycling received notices informing them that the supply of tags had ceased and instructing them to register and activate waste collection under the pay-by-weight system.

A number of County Councillors raised the matter with Leitrim County Council noting that the pay by collection tag system was still in place.

Cllr Des Guckian told the Leitrim Observer that he had intervened directly in the matter contacting Director of Service, Martin Dolan. “My intervention and complaint to Leitrim official Martin Dolan (Dir of Services) has brought about a real and necessary change,” he said.

Cllr Caillian Ellis said he had highlighted the concerns of service users late last week and had received assurances that another system would be put in place which would allow customers to continue to pay per lift even if they could not get their hands on physical tags.

Leitrim County Council has stressed that the tag system remains active and is still running alongside the ‘Pay-by-Weight’ system until the Council meets on the issue on December 1.

The spokesperson for the Council acknowledged that they had been made aware that the available supply of physical tags had become limited in recent weeks but said: “Customers who are interested in continuing ‘Pay By Lift’ (tags) until December 1st 2014 should contact their service provider in this regard where they will be facilitated with appropriate interim arrangements, pending the establishment of their electronic account.”

Barna Recycling have said that their IT department has been working on adapting the technology used to manage the pay by weight system, to manage a pay by lift service for County Leitrim households, as an interim measure until December 1st.

“This pay by lift service via the electronic system will necessitate the opening on an account with us, but there will be no service charge chargeable. The cost of the lifts will be the same as the cost of the tags, ie €13 for a 240 Litre waste bin and €6 for a 240 Litre recycling bin,” said a spokesperson for the company.

Leitrim County Council had hoped to enact the new pay-by-weight bye-laws earlier this year but Councillors moved to defer the decision until December 1 to allow for further details on costs to be clarified.