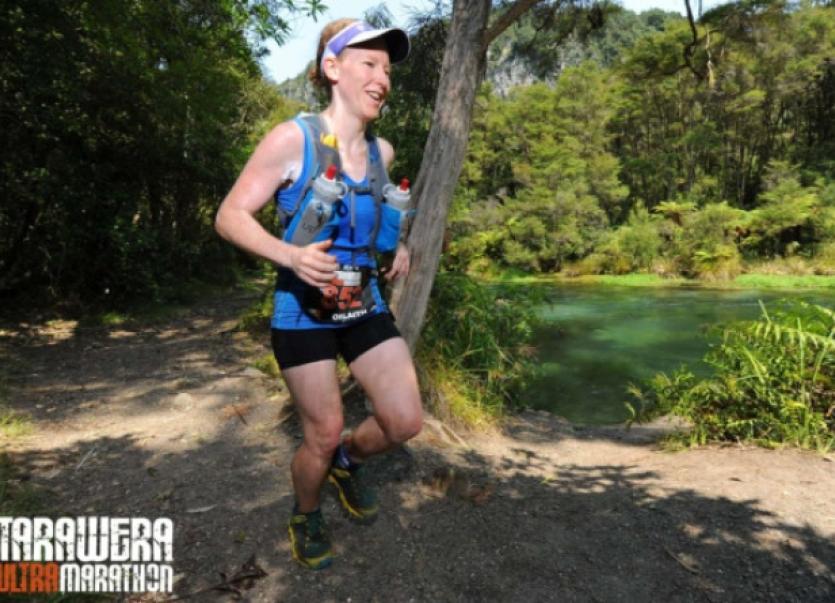 For most of us, even the thoughts of a leisurely evening run is enough to tire us out. But consider what it takes to complete an 85km ultra marathon in stifling humidity, rough terrain and suffocating heat.

For most of us, even the thoughts of a leisurely evening run is enough to tire us out. But consider what it takes to complete an 85km ultra marathon in stifling humidity, rough terrain and suffocating heat.

This was all in a day’s work for Drumshanbo native Orlaith Heron who was first home in both her gender and age category with an incredible time of 9;51;23 following the recent Tarawera Ultra Marathon in New Zealand. The former Drumshanbo Athletics Club member, now a doctor in Tauranga, near the city of Hamilton on New Zealand’s North Island, was once a regular on the Drumshanbo to Dowra road along Sli Liatroma and by Stoney River.

“My favourite athletic event was the long distance but that was just 800 metres”, jokes Orlaith. “I then started taking part in sprint triathlons a few years ago and began running five and ten kilometres on roads around Dublin when I was in college.”

The weekend of the world renowned Tarawera event coincided with Oralith’s fifth anniversary of her arrival on the Australasia island. Having fell in love with the outdoor lifestyle and work/life balance, Orlaith was forced to decide between sitting Irish and local medical exams in order to progress her career. “Unfortunately neither cross credit each other”, she says. “It was a tough decision (to take the Australasian exams) as I am a long way from family and friends and you miss a lot of important family events.”

The decision to run such a demanding event is not one which can be taken lightly. But fortunately for Orlaith, she went into the Tarawera event with the experience of the Northburn 50km event which she ran last year. “If you asked me a few years ago, I would certainly have said there was no way would I run one.”

Orlaith admits she was slightly out of shape when she arrived in the southern hemisphere but participation in the 17km off road Toi’s Challenge along with regular training meant she steadily built herself up for challenges ahead. “There are hundreds of national parks and forests dotted around where I live and (training there) became a great way of seeing the countryside and there was also the social aspect. It’s a great de-stresser.”

As with preparation for any athletic event, injury is inevitable. Orlaith began to have recurring problems with muscles around her knee as the training continued. “Luckily”, she says, “I found a great physio in Hamilton and we worked on not just patching up the problem but also on preventing it happening again.” This led to prolonged cross-training and core work and from there on, Orlaith went from strength to strength.

In terms of training for such events, she says there are different methods to suit everyone. “It’s a case of different strokes for different folks. I had more or less set up my own programme while training for Northburn but six months before the event, I felt like I was fatiguing. Luckily a member of my club, Graham, who also coaches offered my help. My long runs became shorter distances and I began tempo and speed work. I’m not a fast sprinter, but it has made me faster and stronger.”

The weekend of the Tarawera event was an enjoyable one for Orlaith. Having stayed with friends in a Bach (Kiwi term for holiday home) from Auckland, she was then ready to undertake the challenge of a life time. “There was a buzz around from start to finish and even the weather played along. The course had to be adjusted due to a cyclone and fire risk over the last two years respectively.

“I lined up beside two fellow club members and was more excited than nervous.” Orlaith concedes that she started off slower than expected but a mix of vocal backing from volunteers on the side of the track and the inspiring sights and sounds of the rural landscape kept her going. “The support was incredible. Not just from people I knew but also the volunteers and there was even a guy playing jazz in the middle of the forest at about 8km! At the Okeraka Aid Station I needed sun cream so I made the most of it and also wolfed down some watermelon and fluids.”

Then it was on to the Western Okatina Way, the least favoured section of the race. Orlaith described: “This section of the track is more uphill but I ended up beside a friend from Auckland and once we began chatting, it just felt like a training run really. I loved it and smiled all the way to 60km.”

The terrain then switched to blistering gravel and this heralded a change of footwear to deal with the effects. “I don’t remember the pain. I just kept gritting my teeth. I forgot my iPod so sung a few tunes to myself as the field thinned out after 60km. I spotted Graham waving from afar and that was so encouraging. There was another girl running alongside who told the volunteers my name so they could support me along with way. She kept telling me how awesome I was!”

Following nearly ten hours of constant running, Orlaith, as one would expect, was rather happy to see the finish line. “I’d like to pretend I was calm crossing the line, but I was so happy and relieved to see it. I don’t know what I said to the Race Director at the finish line but I doubt I made much sense.”

The arduous affair has not dampened Orlaith’s appetite for further runs however. With a hint of much deserved pride, she quips: “I’ll definitely enter more races in the future. I just haven’t decided which ones yet!”