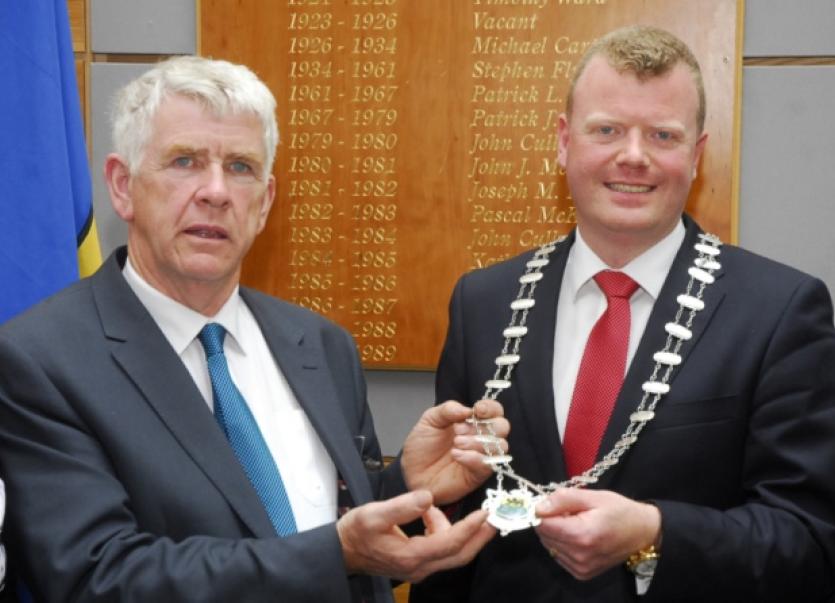 Fine Gael’s Cllr John McCartin has been elected by majority to fill the position of Cathaoirleach of Leitrim County Council for 2015/16.

Fine Gael’s Cllr John McCartin has been elected by majority to fill the position of Cathaoirleach of Leitrim County Council for 2015/16.

Winning by a 75 percent majority at last Friday’s Council AGM, Cllr McCartin described his election as “a tremendous honour and privilege”.

“I served in the previous term of the Council as a councillor with great pride and I believe that this Council can work as well and as cohesively as the previous Council did,” he told the Chamber after he assumed the Chair.

Thanking his party for entrusting him with the privilege of not just leading the Council, but his party colleagues, Cllr McCartin also paid tribute to his wife Edel and their five children for being so tolerant of his absences and so supportive of him in every aspect of his life.

Thanking the staff and the CEO of the Council for their assistance over the last six years he said that “the role of Chairperson of the Council is something I have to make myself comfortable in over the next 12 months.

“I hope to bring efficiency and balance to discussions in the chamber and ask those in the Chamber to leave any personal issues or history at the door.”

Referring to the limited power of the Councillors, Cllr McCartin stressed that, while they could not create jobs in the county, members could “help to create an environment where businesses and jobs are fostered naturally”.

“I look forward to working with the Council to re-establish the Local Involvement Schemes and Community Involvement Schemes, to promote the Greenways and the Blueway and to make a positive contribution to the County over the next 12 months.”

Cllr McCartin’s Fine Gael colleagues and Fianna Fáil representatives offered their good wishes to him in his new role, saying that he had not only come from a strong political family, but had worked hard to create jobs in the county and had proven a ready and willing ambassador for the region.

Cllr Stenson offered his congratulations but urged the new Cathaoirleach to use his influence with his party at a national level to secure additional funding for the roads network in Co Leitrim.

Fellow Independent, Felim Gurn, asked the Cathaoirleach to also push for better broadband and greater investment in tourism during his term in office.

Sinn Féin’s members, while being unhappy with the power sharing agreement in place at the Council, all wished Cllr McCartin well over the next year, describing him as being a great ambassador for the county.

CEO, Frank Curran, also added his congratulations on behalf of himself and the staff of the Local Authority and assured Cllr McCartin of their assistance and support.

“The challenges remain the same (over the next 12 months of the Council),” he acknowledged.

“We need to attract as much investment as possible to the county.”

Following the election of Cllr McCartin, Cllr Mary Bohan was elected unopposed to the position of Leas Cathaoirleach.

Wishing her well, outgoing Leas Cathaoirleach, Cllr Sinead Guckian said that she was delighted to see women getting leadership roles in the current Council although she lamented that these were, in the first two years of this Council, only that of Leas Cathaoirleach and not the role of Chairperson.