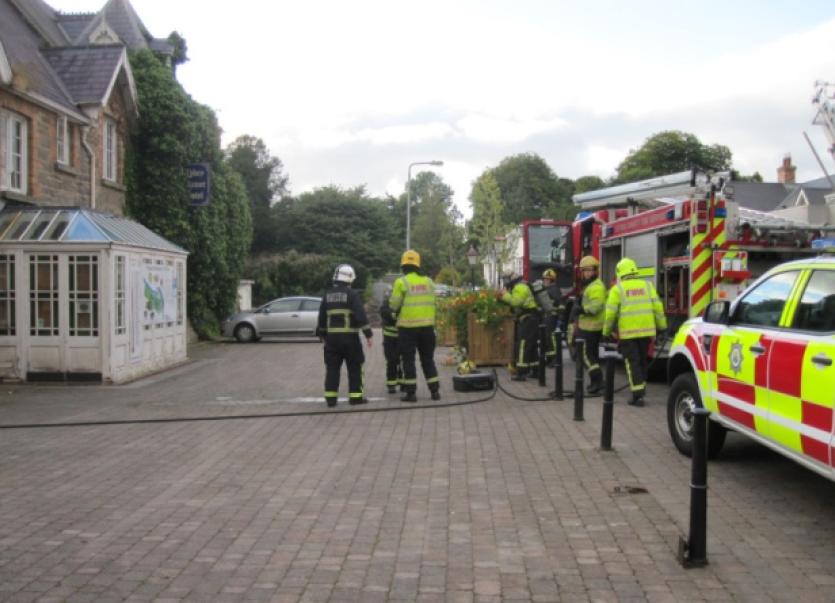 Gardai and the fire services were at the scene just after 6.30pm after locals alerted them to a small fire in the ballroom extension of the Abbey Manor Hotel.

The fire was brought under control and the Gardai carried out a preliminary examination of the scene before the building was boarded up and made reasonably secure.

It is understood that the fire was contained in the old ballroom and that the damage was minimal due to the disrepair of the building in the first place.

Locals had noticed the fire due to the large amount of smoke coming from the building. The main road through Dromahair was closed until 10pm on Tuesday night .

There have been ongoing calls for the old hotel to be preserved as it has been lying derelict for a number of year.

Save the Abbey Manor Hotel Facebook commented last Tuesday night, after the fire had been extinguished, “This building needs protecting ASAP. Lets hope the people responsible for this are caught. The people of Dromahair need to stand up now and fight for protection on this once beautiful building. Something needs to be done NOW”.

There has been a number of issues with this unsecured abondoned hotel for the past number of years and the Gardai have been called out frequently to deal with squatters and young people drinking in the building.

Leitrim County Council issued notices under section 59 of the Planning and Development Act to the owners of the derelict Abbey Manor Hotel in Dromahair in July this year.

The notices require substantive works to be carried out to save the protected half of the development and further notices have also issued to the owners under the Derelict Sites Act, requiring them to repair the rear extension on the property and clean the surrounding grounds of rubbish and debris. Four owners had now been identified - one of whom is now deceased.

Gardai in Manorhamilton are appealing for anyone who saw anything between 3-6pm at the hotel or on the Main Street to contact them on 071 9855014.