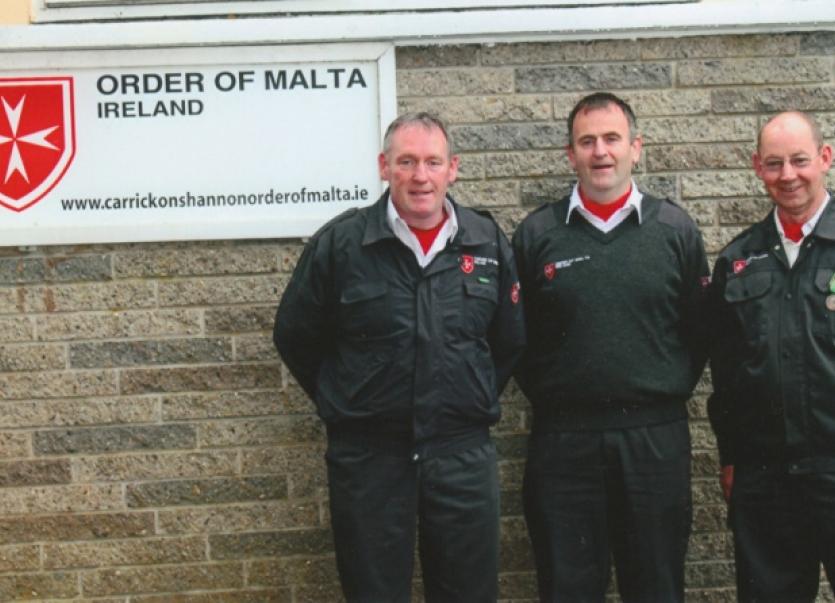 Three members of the Carrick- on-Shannon unit of Order of Malta were recently recognised by the Irish Association of the Order of Malta and the National Director, for their outstanding and dedicated work to the Order over the last nine years.

Three members of the Carrick- on-Shannon unit of Order of Malta were recently recognised by the Irish Association of the Order of Malta and the National Director, for their outstanding and dedicated work to the Order over the last nine years.

The three members are Sean Donoghue, Kevin Hennessy and Jim Cosgrove. Sean and Kevin are two of the founder members of the Carrick-on-Shannon unit when it opened in 2006, whilst Jim is the current Training Officer in the unit.

Nationally only eight members were honoured with bronze medals, and it is highly commendable that three of the eight were local members here in Carrick-on-Shannon.

The members’ families and friends were invited to this event also which in itself was recognition to them for their understanding and patience whilst their partners conducted Order of Malta business. The ceremony was made up of speeches and presentations was followed by a buffet, whilst background music was provided by a live band.

The Senior Management of the Order recognised Sean, from Boyle, for his work as the Officer in Charge of the Carrick unit; Regional Finance Officer for 13 units in Counties Sligo, Leitrim and Mayo; as well as an Internal Auditor nationally.

Kevin, from Elphin, the Deputy Officer in Charge of the unit, was also recognised as the backbone and driving force of the Carrick-on-Shannon unit. It is a well known fact that Kevin will talk a little and the job will be done. His motto could be summarised as talk about it once, only once, and then make it happen. He does not believe in long committee meetings!

Kevin says that “I think that is Sean’s job as he likes talking and is good at it”. One of Kevin’s main achievements is keeping the Ambulance fleet maintained and operational.

“This is done very quietly, and the fact that the maintenance cost, to a relatively old fleet, has been small over the last number of years is testimony to his expertise and commitment.

“He is a Jack of all Trades and appears to be master of all too. He has a tremendous ability to investigate any query, medical or mechanical, and always seems to approach the person who can point him in the right direction.

Jim, from Carrigallen, though not a founder member, seems to have been around for a long time, and is a very popular and respected member of the unit.

He is always available to help out members with any aspect of training whenever or as often as members want. He is consistently recognised within the unit as the volunteer that covers most duties year on year.

He is well known across a number of units nationally, as he has helped out on many National duties covering major concerts, racing, etc. Jim is also renowned for his stories and storytelling ability; and any duty spent in Jim’s company will pass very quickly and leave you with tremendous memories.

The other members of the Carrick Order of Malta, whilst not recognised at this awards ceremony, do sterling work in the locality and, no doubt, in the very near future will be rewarded at such a ceremony. All members of the Order of Malta are volunteers and give of their time in a very generous manner.

We have started doing some work with older members of the community. This involves taking them out on day trips to Knock and the Museum of Country Life in Castlebar. This work will be extended over the coming months and years.

We are always looking for new members. We meet every second Monday in St. Mary’s Hall, Summerhill, Carrick-on-Shannon. Further details can be obtained from any member of the Order or by logging onto www.orderofmalta.ie