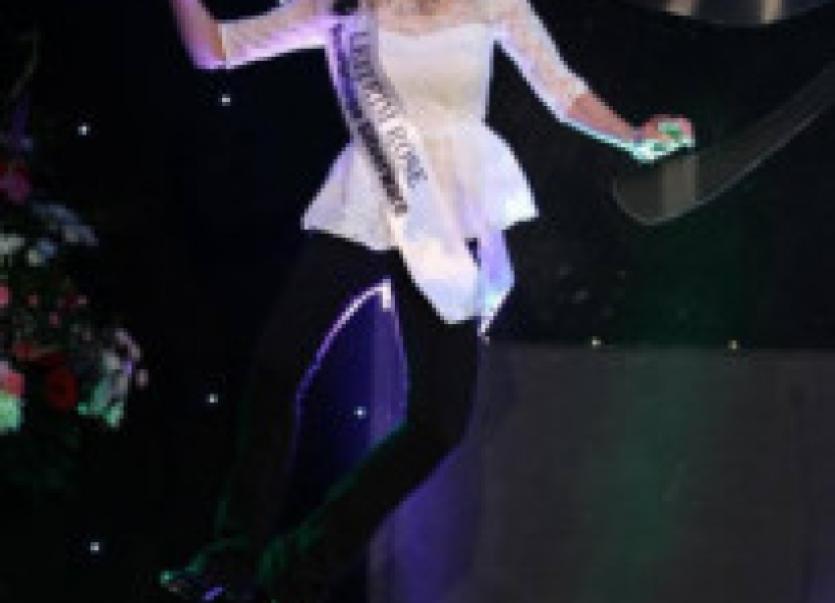 Shining through as a real Leitrim Ambassador, Edwina Guckian promoting Carrick-on-Shannon 400 has been selected to represent the county in the International Rose of Tralee Festival in August.

Shining through as a real Leitrim Ambassador, Edwina Guckian promoting Carrick-on-Shannon 400 has been selected to represent the county in the International Rose of Tralee Festival in August.

Beautiful Edwina Guckian from Drumsna is well known throughout the county as an award winning Sean Nos Dancer. She was delighted to have impressed the judges over the weekend enough to secure a coveted spot in the Rose of Tralee Finals. Speaking to the Leitrim Observer after her selection, Edwina said it was a “massive shock” to be one of the sic Irish roses selected from 30. She said from Thursday to Monday it was full on with something happening every half hour in Portlaoise.

Edwina said she was comfortable speaking to Daithi OSé, as she knows him from the traditional music circle and he was her group’s mentor on the All Ireland Talent Show in 2011. For her party piece Edwina obviously had some dancing steps, but she had to do a quick outfit change from a glamorous dress to trousers to enable the high jumps!

The Drumsna girl can’t wait for Tralee, her boyfriend Michael is from Kerry and she has been down at the Rose of Tralee festivals for a few years. “Never did I ever imagine I would ever be a Rose,” she said. Preparations must begin shortly as Edwina will need 22 different outfits for the international festival.

Edwina has been dancing for 20 years, doing Sean Nós steps all over the world, sharing the stage with Frankie Gavin, De Danann, Seamus Begley, Martin Hayes and Dervish. She has won two world Sean Nós Dancing titles, teaches at some of Ireland’s biggest trad fests and was awarded Leitrim Arts Person of the Year 2007 and 2011. She is currently involved in Ken Loach’s latest film Jimmy’s Dancehall which is being filmed locally this Summer.

Edwina’s dance club Sean Nós ar an tSionann which includes over 300 children celebrates 10 years of success in 2014. The group of Sean Nos dancers have performed for President Michael D. Higgins, Michael Flatley and Mary McAleese, appeared on The Late Late Show, were awarded Rehab Culture Group of the Year 2013, fundraised for Our Lady’s Children’s Hospital, won Oireachtas na Samhna and Fleadh Ceoil na hEirinn All Ireland titles. In 2011 Sean Nós ar an tSionann made it to the final of RTE’s All Ireland Talent Show representing Dáithí Ó Sé and the West.

But Edwina’s talents do not end there, the also plays the fiddle, whistle and concertina.

The talented young lady is currently PRO for the HUP Festival - a week long celebration of all that is good about traditional Irish music, song, dance and drama which leads up to the Connacht Fleadh Weekend in Carrick-on-Shannon this Summer.

Edwina will be joined by roses from Longford and Donegal, who were also selected at the Rose of Tralee Regional Festival to join their counterparts from the Monaghan, Wicklow, Clare, Kerry, Cork, Dublin, USA, Canada, Great Britain, Europe, Australia and the Middle East in the Dome at the Rose Tralee from 14th to 20th August.

Edwina’s homecoming to Drumsna saw a huge turn out on Monday night. She was sang back to the village by Leitrim Cathaoirleach Enda Stenson and Mary Blake.

At the time of going to press Edwina’s odds to win the Rose of Tralee was at 20/1 on Paddy Power. She is hosting a fundraising ceili for her supporters this Sunday, June 9 in The Bush Hotel from 7.30pm with All Ireland Champions the Salamanca Ceilie Band.