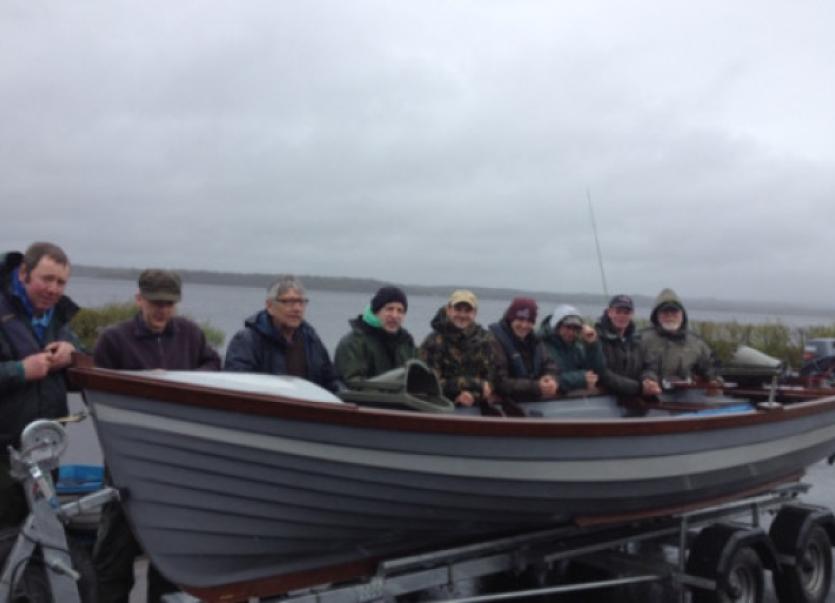 There’s something that fires the imagination about the silhouette of the lone boat fishing on a lake. We’ve all been there, you spot it bobbing up and down on the water, and for a short moment you are mesmerised by a fleeting glimpse of craft and nature together. Maybe it’s because it’s a scene that hasn’t changed much over generations and gets to the core of rural life.

There’s something that fires the imagination about the silhouette of the lone boat fishing on a lake. We’ve all been there, you spot it bobbing up and down on the water, and for a short moment you are mesmerised by a fleeting glimpse of craft and nature together. Maybe it’s because it’s a scene that hasn’t changed much over generations and gets to the core of rural life.

It’s Sunday and you pass by a crowded church in Rossinver toward a congregation of a different kind. Rossinver/Melvin Trout angling club are having their first competition in their league, and you have been invited into their fold. The weather is damp, but spirits are not. You are bowled over by the sense of camaraderie of the crowd of almost 15 men already gathered as they laugh, joke and buzz around getting equipment and boats ready together. Jim Connolly is the Chair of the angling club and on this day there’ll be an estimated 20 competing. The club has been going since 1978 and boasts members from both sides of the border and traditions.

What’s so special about fishing as a hobby and fishing on Lough Melvin you ask? You get a sense of the pride from those gathered as they enthusiastically tell you of the reputation of the lake. “Its one of the best fishing lakes in the country” says Jim. And that sense of adventure “there’s more action on this lake then any other” It’s hugely popular on a cross border and a national level for fishing, with over 90 anglers coming from all round Ireland and northern Ireland he tells you travelling to last year’s Dennis McSharry Memorial Cup which is held again this year on June 21.

You recall that the first salmon of the year was caught near here on the River Drowes. The men are at pains to tell you that the fish on the lake are all wild, not farmed and that’s one of the things that make it special. That sense that things haven’t changed too much around here for many years is reiterated when James Phelen one of the club members tells you about the Sonaghan trout, a species that is one of a kind and can only be found on Lough Melvin. Other trout like the Gillaroo and Ferox have been found through research to be genetically distinct and have been traced back to and are “surviving happily here since the ice age,” according to James.

You get a feeling that these men are far from hunters but more protectors of their natural heritage and proud of it. They have stringent conservation regulations they abide by in their fishing. They light up at a chance to share the love of the lake with visitors from home and abroad. Jim says he is happy to bring tourists out whenever they wish. The only time their tone changes to a serious one is when they talk about threats to this area. They wear their antifracking colours like a badge of honour. A “fishing not Fracking” sign has been erected in on the entrance of the roadway down to the lake.

Gareth Fowley another fisherman tells you that the Lough Melvin supplies the drinking water of Bundoran and Ballyshannon which would be at risk. He tells you how fishing has been affected badly by short term thinking in another county through a damming development where water flows were cut off, causing havoc and decimating what was abundant and infamous fishing in that area. The fisherman are adamant that the risks caused by pollution and lowering of water levels caused by fracking as a industry would be detrimental to the spawning and survival of the species that they have been protecting, to their lifestyle they and their children now love, and the tourism of the region.

I am shown Church island where masses were held in another century by their forbearers which rests on the lake symbolically. James Phelen is adamant that promoting tourism is the only sustainable industry in his mind and referring to fracking says, “Its not going to happen, it can’t happen. It will be a complete and utter disaster for Lough Melvin.”

And you get a feeling if these men have anything to do with it, it won’t.