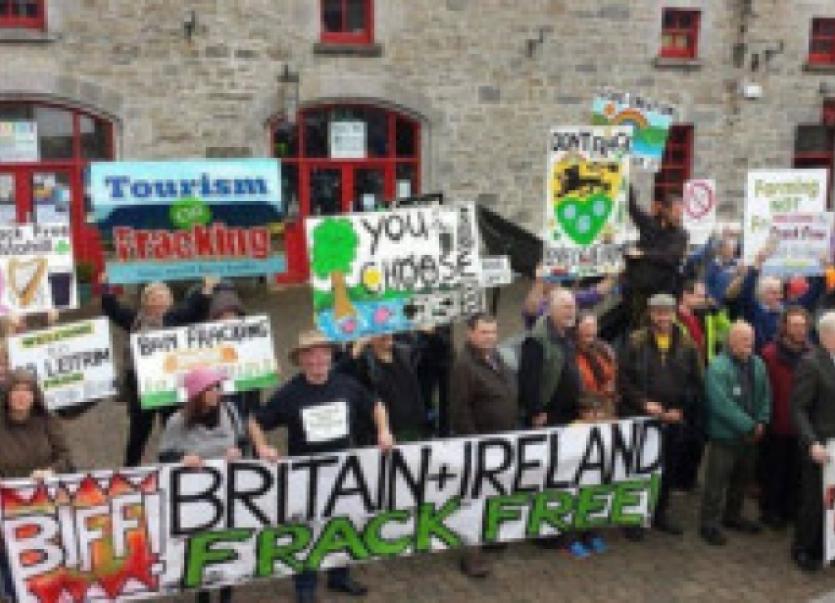 Last Saturday as part of Global Frackdown Day, a co-ordinated, international day of action against the fracking industry, campaigners and communities all over Ireland organised events calling on the government to ban fracking.

Last Saturday as part of Global Frackdown Day, a co-ordinated, international day of action against the fracking industry, campaigners and communities all over Ireland organised events calling on the government to ban fracking.

Events took place throughout the country, while locally campaign groups organised events in Manorhamilton and Carrick-on-Shannon. In Manorhamilton campaigners planted flower bulbs in sites around the town in a gesture to show how communities can work together to help protect and promote the area they love.

In Carrick-on-Shannon Cllr Gerry Dolan, Cllr Martin Kenny and Luke Ming Flanagan TD addressed a No Fracking Ireland public gathering, and supported the campaigns call on the government to ban fracking. To mark the day a “Trad Against Fracking” social event was also organised by campaigners.

These local events were part of an international day of action calling for a global-wide ban on fracking. Over 200 hundred events took place in over 20 countries, spanning six continents.

At a recent anti-fracking meeting in Drumshanbo, organised by the United Farmers Association, Michael Colreavy TD.said he understood peoples concern with regard to the effect the industry would have on communities south of the border if allowed to proceed in the North.

Cllr Mary Bohan also attended the farmers meeting and stated that at the annual Fianna Fail Ard Dheis, she tabled a motion, which was passed by Fianna Fail party delegates calling on the government to ban the industry.

The now annual international Global Frackdown event is organised by Food and Water Watch, a grassroots advocacy organisation based in the U.S. and Brussels. Last month, Executive Director of the organisation Wenona Hauter who is based in the US was visiting the U.K and Ireland. While in Ireland Ms Hauter travelled to Carrick-on-Shannon to meet with locals from the No Fracking Ireland campaign network.

Speaking to local campaigners Ms Hauter said, “I think countries like Ireland that still have an agricultural culture should really take a lesson from what’s happened in the US, because I think that there is a plan by elites to produce food where it’s the cheapest and that’s in developing countries where labour is cheaper, where chemicals can be used that are illegal in the EU or even the US. They have no respect for agriculture or the way of life in rural areas.”