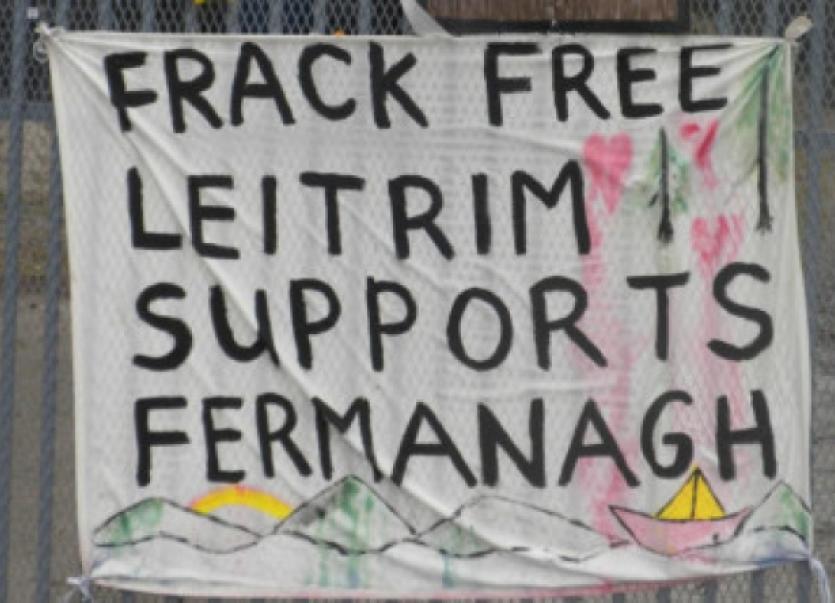 Tamboran are proposing to drill samples from the rock in the quarry in Belcoo, which will be sent to the USA for further analysis.

They have already erected security fencing at the quarry on Gandrum Road, Co Fermanagh and have sought a High Court injunction against protestors at the site.

In an emergency meeting called by councillors this morning in Carrick-on-Shannon councillors stressed the need for unity between all parties in the fight against the introduction of hydraulic fracturing both north and south of the border.

Approximately 90 anti-fracking campaigners, including representatives of Love Leitrim and the Irish Farmers Association (IFA), staged a peaceful protest outside of the Council offices in Carrick-on-Shannon for the duration of the meeting.

Inside the meeting the mood was just as determined with the 18 members of Leitrim County Council voting to not only condemn the actions of Tamboran, but also voting to show their support for the people of Fermanagh in this by agreeing to join those protesting at the gates of the quarry.

There was widespread shock and condemnation over Tamboran’s recent move to the Belcoo quarry and a number of councillors who have already attended the protest site, spoke of their anger over the installation of security fencing and razor wire.

“Minister for Communication and Natural Resources, Alex White TD and An Taoiseach, Enda Kenny TD and the Government to intervene with UK Prime Minister, David Cameron; First Minister of Northern Ireland, Peter Robinson and Deputy First Minister for Northern Ireland, Martin McGuinness; and the Stormont Executive to immediately stop all drilling works being carried out by Tamboran and their agents.”

This follows on from a ban agreed by Leitrim Councillors earlier this year which saw hydraulic fracturing prohibited under the County Development Plan.

Putting forward her motion, Cllr Bohan said that she believed people had been let down at National level by the politicians in both Northern Ireland and the Republic.

She stressed the need for solidarity now at all levels.

All councillors immediately expressed their support and agreed that this situation was one which would impact not only counties Fermanagh and Leitrim but the entire island of Ireland.

Cllr Des Guckian put forward a motion calling for condemnation of Tamboran’s actions in Belcoo while Sinn Féin councillor, Padraig Fallon, called for all councillors to visit the site and “show our solidarity with the people of Belcoo”.

Further clarity is now being sought on whether the licence at the quarry in Fermanagh has expired. Questions are being raised about the legality of any drilling on-site if the quarry is unlicensed.

Politicians north and south of the border are following up on this and it is hoped that further information will be forthcoming in the next few days.

Anti-fracking protestors have welcomed the united front show by Leitrim’s Councillors on this issue.

Eddie Mitchell of Love Leitrim spoke to reporters after the meeting and said he was delighted at the stand taken by Leitrim County Council.

In the meantime, anti fracking protestors have established a community camp outside the quarry in Belcoo and are maintaining a 24 hour vigil at the gates of the quarry. They have stressed that they will continue to maintain a presence in Belcoo and are “in this for the long haul”.