Kisses, hugs and handshakes as Taoiseach hits the campaign trail 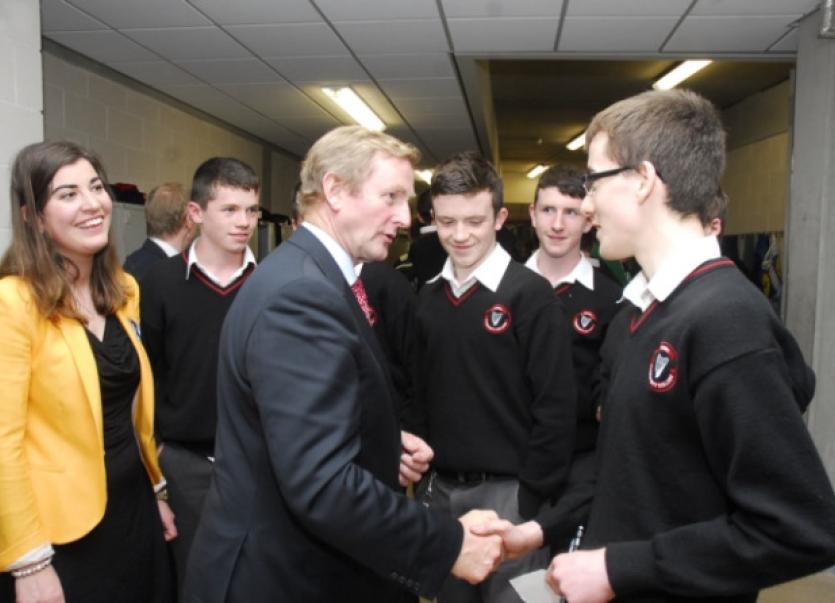 Following his attendance at the official opening of Ballinamore Community School on Monday morning last, An Taoiseach Enda Kenny took to the streets of south Leitrim to canvass the local area in support of Roscommon/South Leitrim bye-election hopeful Cllr Maura Hopkins.

Following his attendance at the official opening of Ballinamore Community School on Monday morning last, An Taoiseach Enda Kenny took to the streets of south Leitrim to canvass the local area in support of Roscommon/South Leitrim bye-election hopeful Cllr Maura Hopkins.

The Fine Gael leader met with locals, business owners and workers across the towns of Ballinamore, Mohill and Carrick-on-Shannon.

Speaking to reporters outside the school, Mr Kenny showed his support for his fellow party member, describing Cllr Hopkins as ‘articulate’ and a potentially ‘outstanding public representative.’

He said: “I think Maura Hopkins speaks for her generation in a way no other candidate can. She articulates the concerns and needs of the people of Roscommon/South Leitrim in an understanding way.

“She is going to have a very long and fine future in politics and is one of the finest bye-election candidates I have come across in years.

“The people of this constituency should be very pleased with such an open-minded, young person. She is focused on the future and has plenty of enthusiasm and exuberance. She would make an outstanding public representative.”

When asked if there was anything in the upcoming budget which could allay fears and help the people of the Leitrim and Roscommon area, specifically the issues which affect St Patrick’s Hospital in Carrick-on-Shannon, Mr Kenny was coy, saying that further challenges lay ahead.

He said: “Health is one of the most challenging areas we oversee. It’s a demand-led system. You cannot predict what the future holds with regards to illness.

“But what you can do, is implement a system which is efficient and well managed.”

Mr Kenny went on to emphasise the need to change to a one-tier health system. “This system must be non-discriminatory and will allow people to receive treatment in areas as close as possible to them, based on their medical needs and not on what they may have in their pockets.”

The Taoiseach also suggested that significant strides were already made in terms of healthcare nationwide, but noted that a lot more needed to be done.

“These are challenges for the time ahead. The budget will set out the ceilings to be agreed and we do hope that a level of health spending can be established that will provide front line services that the people need.”

Mr Kenny then proceeded to visit local businesses in the Ballinamore area, while conversing with locals he met along the way.

He paid a visit to Donohoe’s SuperValu on Main Street and to the yet to be opened Ballinamore Primary Healthcare Centre, before making his way to Reynolds’ bar where he met local Fine Gael members and supporters.

The group then moved on to Mohill and to Arus Carolan Nursing Home to meet with staff and patients, before stopping off at Mohill Community College where Mr Kenny greeted Leaving Certificate students.

The Taoiseach completed his visit to county Leitrim with a trip to Carrick-on-Shannon and a quick call to VistaMed in the IDA Business Park to meet with staff and management, before lunch in Cryan’s Hotel.

Both Mr Kenny and Cllr Hopkins then completed the visit as they partook in a short canvass on behalf of Cllr Hopkins around Tesco Car Park.