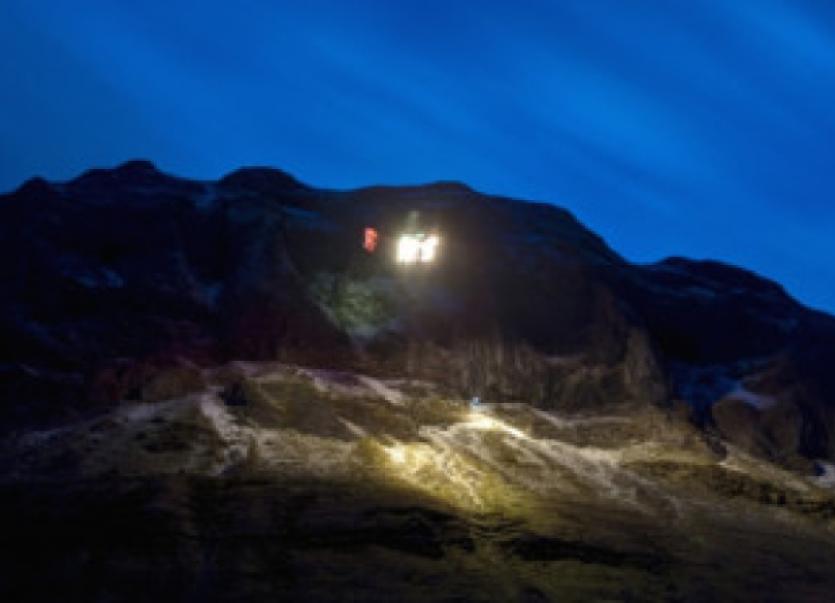 Several members of UCD and DCU caving clubs had to be rescued from high ground above the Gleniff Horseshoe in County Sligo on Saturday night last, the 21st of February.

Several members of UCD and DCU caving clubs had to be rescued from high ground above the Gleniff Horseshoe in County Sligo on Saturday night last, the 21st of February.

The groups were exploring the area around ‘Diarmuid and Grainne’s Cave’, a large cave high up on the cliffs above Gleniff.

While descending the mountain, two of the group slipped and fell a considerable distance. Conditions at the time were poor with packed snow lying on the upper slopes and a considerable wind chill in effect.

Four other individuals, who had ascended to a narrow ledge close to the cliff face, became ‘crag-fast’ and were unable to return back down the mountain.

A 999 call was placed and Sligo Leitrim Mountain Rescue Team was tasked by the Gardaí. The Team were on scene at 4:30pm.

Due to ground and weather conditions, both the Donegal and North West Mountain Rescue Teams were requested to assist by the Sligo Leitrim Team.

There were a number of Mountain Rescue teams attending a national AGM in Co. Fermanagh over the weekend.

Following an initial assessment of the individuals who had fallen, a decision was made to task the Coastguard helicopter, Rescue 118, from nearby Strandhill to airlift one of them to Sligo Regional Hospital.

The rest of their party was then escorted safely off the mountain by Rescue Team members. Rescuers then made the difficult ascent to the remaining four people amidst snow showers and approaching darkness.

Rescue 118 returned to the scene and, although it was unable to perform an airlift of the casualties, it illuminated the scene by search light for a period of time.

The four cavers were then carefully belayed, lowered and led safety off the mountain. All casualties were safely off the hill by 10:30pm.

Sligo Leitrim Mountain Rescue Team Leader, Conal Sexton, said that this difficult technical rescue was an example of great co-operation between the three neighbouring volunteer rescue teams plus the Irish Coast Guard and the Gardaí.