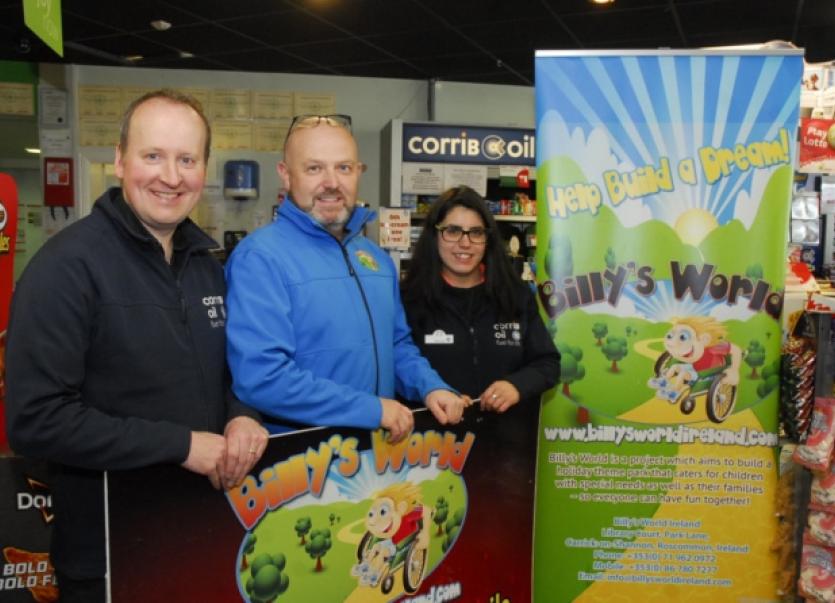 Three people residing in the Leitrim/Roscommon area will participate in the New York Marathon this coming November in aid of Billy’s World, the sensory experience facility which caters for children with special needs and their families.

Three people residing in the Leitrim/Roscommon area will participate in the New York Marathon this coming November in aid of Billy’s World, the sensory experience facility which caters for children with special needs and their families.

The 65,000 square foot facility which will be situated in Killenard, County Laois is currently under construction but a figure in  the region of €700,000  is required to finish the project.

The centre is being constructed in the memory of Billy Byrne, who passed away at Temple Street Children’s Hospital in March 2013, just one week short of his sixth birthday. Billy had Pallister Killian Syndrome, a rare development disorder which affects many parts of the body.

Life expectancy is normal in those who suffer from PKS, but Billy’s untimely death came after he contracted influenza and was unable to recover.

Billy is the son of Tony and Cora Byrne who live in Carrick-on-Shannon and both of whom are the driving force behind the establishment of Billy’s World.

In a mammoth effort to raise funds towards this worthy project, Noel Scally, Arancha Serrano and Leti Tormo will travel to the United States as part of a group of twenty running enthusiasts who will take part in the marathon on November 1. Both Noel and Arancha work in Corrib Oil on the Leitrim Road in Carrick-on-Shannon, while Leti is an au pair in the county town.

The trio are aiming to raise €4,200 each, all of which will go towards  Billy’s World.

Speaking to the Observer last week, Noel, who is also Manager at Corrib Oil said the challenge is one which he is relishing and the charity is one he is only too happy to contribute towards. “I do a small bit of running and enjoy keeping fit. I’ve always wanted to do a marathon and when I was approached by the guys involved with  Billy’s World, I took a few weeks to think about it and now I cannot wait for the challenge.”

Arancha and Leti are both from Valencia on the south east coast of Spain. Arancha has worked with Corrib Oil for the last 18 months while Leti is employed as an au pair in the Carrick area.

“I got to know the Byrnes through Leti who works with family friends”, says Arancha. “Their kids are great and that’s who I’m doing it for. We’ve started doing a little training and I’m really looking forward to going to New York.”

Noel, Arancha and Leti are actively raising funds through a range of different avenues. They are handing out sponsorship cards which are available at Corrib Oil on the Leitrim Road in Carrick-on-Shannon. There is  also a sponsorship card in the Leitrim Observer reception area.

Other events surrounding the effort include a coffee morning in Corrib Oil on Friday, May 15 at their store on the Leitrim Road. A race night takes place on May 29 at a venue yet to be confirmed, while on July 19, Ging’s in Carrick-on-Shannon will weather  permitting, host a barbeque and kids’ fun day. More details to follow.

If you wish to contribute, you can donate online by visiting mycharity.ie and searching Billy’s World or either of the three participant’s names.

For further information, keep an eye on the charity’s Facebook page facebook.com/BillysWorldIreland and the news pages of the Leitrim Observer.