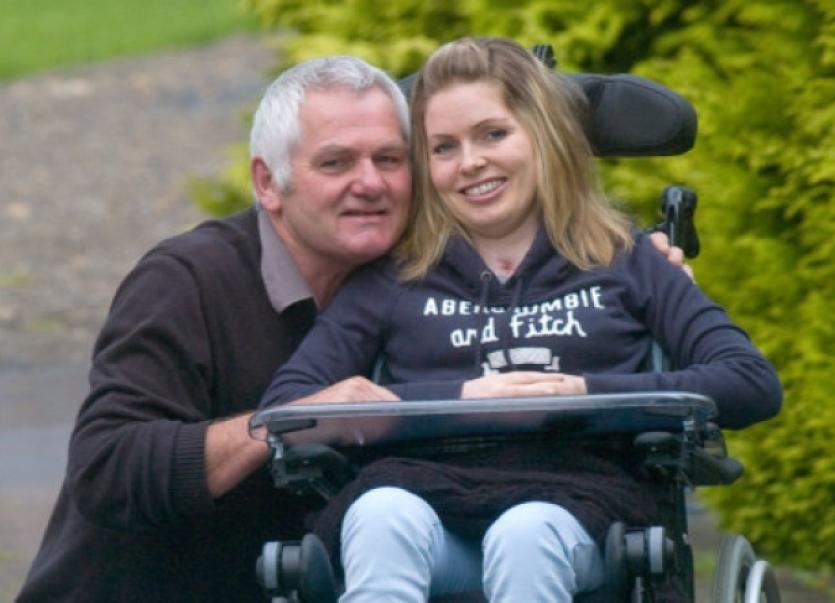 The Branley family from Kinlough said last week’s €10 million settlement will give Lydia “some measure of comfort towards her future care.”

The Branley family from Kinlough said last week’s €10 million settlement will give Lydia “some measure of comfort towards her future care.”

The 28-year-old from Largydonnell was a passenger in a BMW driven by Martin Kearney from Ballina, Co. Mayo when the car crashed into a ditch at Drumiskabole near Sligo on September 30, 2010.

She had to be cut from the vehicle and resuscitated after the driver lost control while travelling at 150kmph and she suffered devastating injuries.

The former aviation radio controller was in a coma for nine months. At one stage Lydia could only communicate through blinking her eyes and clicking her tongue in response to letters of the alphabet.

Over three years since the incident Lydia can still only move her head, she has only recently started a normal diet instead of liquid only and has slowly started to speak.

In June 2012, the driver was sentenced to six years in jail, with the last two years of the sentence suspended.

Lydia was an aeronautical engineer who guided President Obama’s Air Force One across Ireland from her Shannon Airport base the first time he visited Europe and had a promising career ahead of her.

Ms Branley sued Mr Kearney and the car’s owner Michael Kearney. She sat through the case which saw specialists work out how much is needed to pay medical expenses and other costs for the rest of her life. Ms Justice Mary Irvine said €10 million was an excellent settlement and she approved it.

Speaking to the Leitrim Observer, Lydia’s father Martin Branley said the family were “glad” to have the case over although it wasn’t quite the outcome they expected. He said their legal team along with the judge advised them that it was the “best we could do.”

The family were hoping to get €13 million so “€10 million was a compromise.” Martin says obviously the sum is large but when it is broken down it does not account for too many years. The medical, equipment and accommodation costs for the past three years accounts for almost €2 million, he outlined.

Lydia requires at least two people present 24 hours a day, Mr Branley said the lowest quote they received for this service is €320,000 a year.

He said this would give Lydia “25 years of full time care” but this does not include the cost of equipment, therapy, treatments and technologies needed for her day to day life.

Lydia needs a specialised electric bed, air mattress and an adapted vehicle for transport. The family have built a specialised extension onto their house to allow Lydia to move home. She currently resides in hospital.

At the moment her family bring her home for a few hours each evening and take her overnight at the weekend. The overnight stay is “tiring“ as the family need to check on Lydia and move her every few hours during the night.

Lydia’s brother Anthony has been caring for her full time. He has given up his teaching career to care for her.

The family are hoping to get Lydia home in the next two months and to start her care package then.

Martin told the paper his daughter has made huge progress. He said “the improvements have been gradual” over the past 3 and a half years and have taken a lot of time and effort from Lydia and the whole family - parents Martin and Joanne and siblings Anthony and Andrea.

He said they will be trying out different types of technology in the years to come to give her more control of her life. The family hope the settlement will give her a “better quality of life.”

Speaking on Lydia’s behalf, the family’s solicitor Kieran Ryan added, “Lydia would like to thank the doctors and medical staff for their efforts in saving her life and helping with her rehabilitation.

“She would especially like to publicly acknowledge the unstinting love and care given to her by her parents, brother and sister, without which she would never had made the progress she has.”

He concluded, “She is an extremely bright and able person who is an inspiration to all who have had the pleasure of dealing with her.” See page 17.