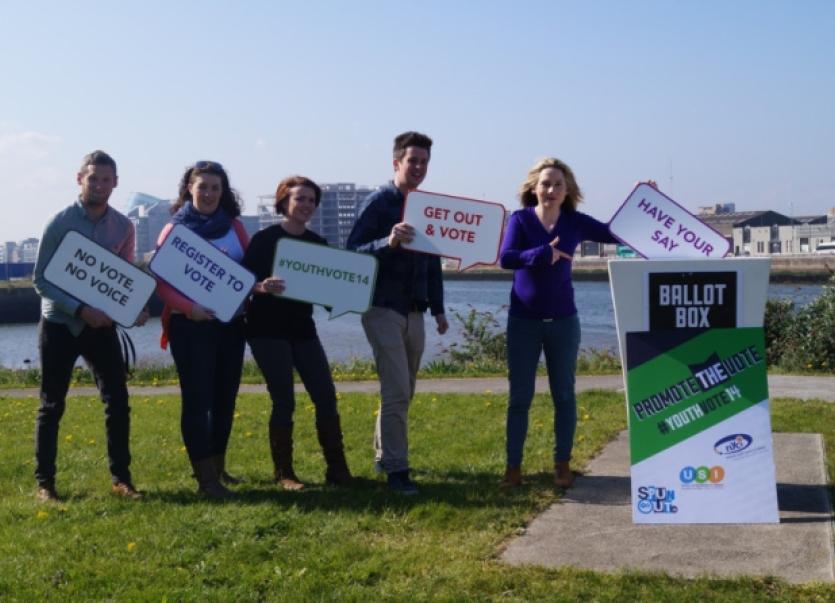 A coalition of youth groups consisting of National Youth Council of Ireland (NYCI), the Union of Students in Ireland (USI) and SpunOut.ie are calling on young people to make sure that they are registered to vote in the upcoming local, European and by-elections.

A coalition of youth groups consisting of National Youth Council of Ireland (NYCI), the Union of Students in Ireland (USI) and SpunOut.ie are calling on young people to make sure that they are registered to vote in the upcoming local, European and by-elections.

With the deadline for inclusion on the supplementary register of electors just 5 days away (May 6th), it is essential that young people move to ensure they are eligible to cast a ballot on May 23.

Not being on the register is a key reason why some young people don’t vote, many are not even aware they have to register. A previous NYCI study found that 26% of 18-25 year olds were not registered to vote, rising to 36% among 18-21 year olds. Many young people lose out on the opportunity to cast their ballot because they are studying or working away from home, unaware they can change their polling station to one near their college, university or workplace.

For information on how to register to vote or change your vote to a new address, you can visitwww.spunout.ie/vote now for a quick and easy ‘how-to’ guide.

Denise McCarthy, Deputy President/VP for Welfare, USI said, “Getting registered to vote is an imperative step for any young person who wants their voice to be heard. We urge people to get registered, get informed and use their voices to make a difference to the important issues facing us all today.”

James Doorley, Deputy Director of the NYCI said, “It’s vital that young people go out and vote as it’s one of the best means which to get politicians and political parties to engage with issues such as youth unemployment, cost of living, mental health services and many others that impact on the daily lives of young people. We also call on candidates to communicate with young voters and outline what they plan to do to address the concerns and needs of young people.”

Finally, the groups are also proposing the establishment of a National Voter Registration Day. Each year, thousands of potential voters miss the deadline for inclusion on the full and supplementary registers of electors. A National Voter Registration Day has been proven[1] to be successful in many other jurisdictions around the world and could have a significant impact on the numbers turning out to vote in Ireland.

Ian Power, Director of SpunOut.ie said, “Voter Registration Days have had success in other countries where thousands of additional voters have been registered. A day with a single call-to-action for potential voters would bring government and civil society partners together to ensure that those who have never voted before are engaged and empowered to use their vote.”