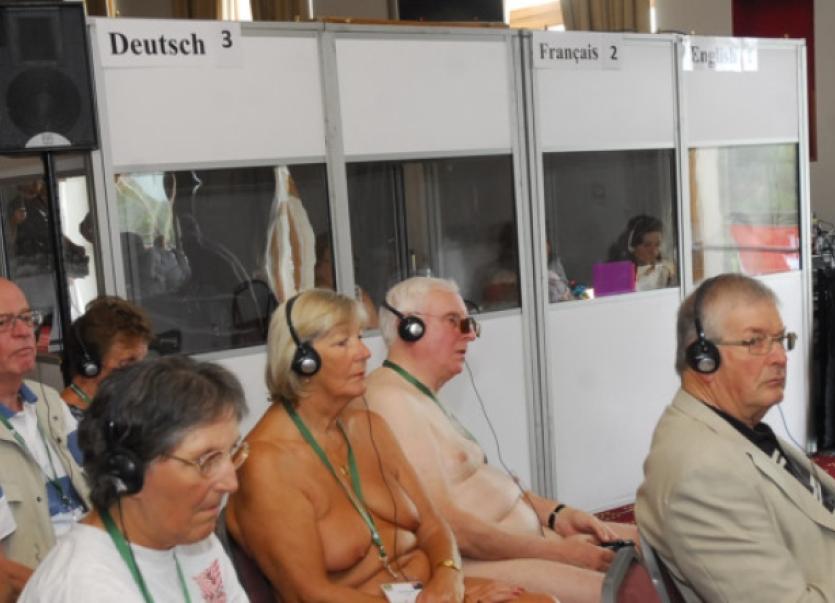 “If you have nothing on, come down to Lough Allen” read one text message doing the rounds locally last weekend.

“If you have nothing on, come down to Lough Allen” read one text message doing the rounds locally last weekend.

There were plenty of jokes, giggles and remarks made about the Naturist Congress in Drumshanbo at the weekend, but they also brought plenty of positive publicity for the county from national and international media.

The congress which focused on Naturist Tourism, revealed that if the legal situation was clearer in Ireland we could gain back vital UK and EU visitors looking to bare all on holidays.

The well organised press conference had English, French and Dutch translators to cater for the delegates from 25 countries. Some delegates travelled over 30 hours from Australia and South Africa to attend the 34th congress in Drumshanbo, while others flew in from Brazil, Canada and across Europe.

At least half of the delegates attended the congress naked, and despite the initial shock of seeing men and women representing their countries without any clothes on, the amusement wore off as the congress settled down to serious business. Laws and tourism promotion, falling membership and local restrictions made up the main concerns for the international organisation.

Many of those who attended spent at least a week in Ireland, while those who were only over for the weekend were treated to trips to the Arigna Mines, Parke’s Castle and enjoyed the private use of Lough Allen Hotel’s spa facilities during their stay.

Fáilte Ireland’s Brian Quinn told the paper that the event was “great news for Leitrim” and part of the board’s showcasing of the Wild Atlantic Way. “They even brought the good weather with them!” he said.

Neil McManus of Lough Allen Hotel said they were “privileged” to host the congress and wished them a wonderful time in the county. The hotel staff said locals had been amused by the event, but everyone would receive a real Leitrim welcome.

Eamon Scully led the Irish Naturist Association and welcomed all the delegates to Ireland.

Each delegate outlined their country’s policy on naturist tourism and it was Ireland that fared the worst with nudity being outlawed here.

The congress said it supported the INA’s efforts “to make naturism better understood in Ireland and to have suitable beaches designated for naturism around the country. Ireland, with its long coastline, has many secluded beaches which would be perfect for naturists.”

Eamon Scully said he felt that Ireland is losing out on the growing worldwide naturist tourism market. The provision of officially approved naturist facilities would draw tourists to Ireland.

Mike Ayers, Vice President said that although Ireland was generally a welcoming country “it has not a lot to offer naturists” despite the huge tourism potential the sector provides.

Eamon Scully made a link between the top tourist countries France, Spain and USA and the fact they have naturist beaches, venues and clubs.

The congress heard the UK are large exporters of naturists. The UK does have naturist beaches, a naturist spa hotel and a lot of naturist campers, but surveys show they like to visit naturist venues while abroad.

The INA representatives said naturist tourists tended to be high spending and environmentally friendly. “We believe we should leave nothing but our footprints behind”.

The delegates who all wore name tags around their necks were informed that they could be naked in the conference centre, half of the boardwalk and in the pool area during the designated hours, but were reminded that nudity is illegal and was not allowed in the public bar.

So locals didn’t get as much of an eyeful as expected!