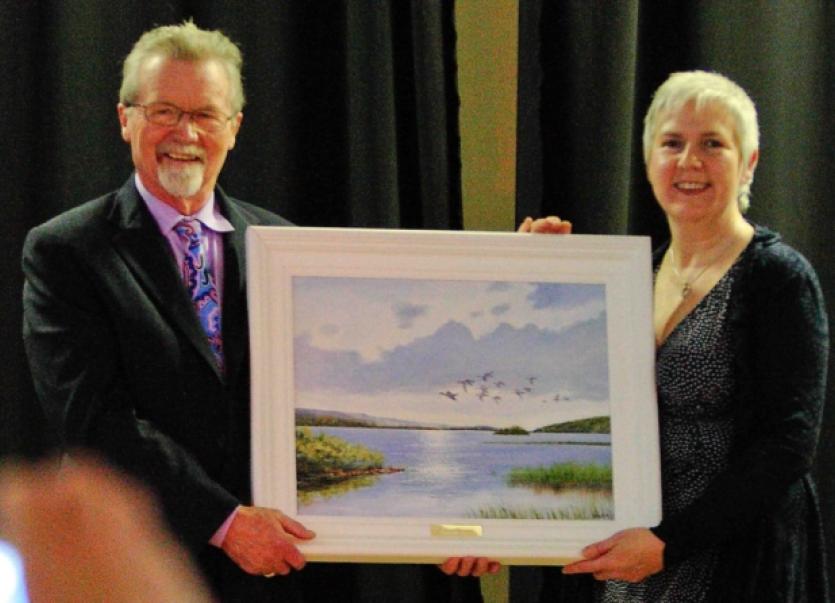 The newly refurbished Ballroom of Romance in Glenfarne proved to be a fitting venue for the launch with award winners in various literary categories also honoured on the night.

After those in attendance in the packed venue were fed it was almost time for the serious business of the evening to get underway.

Hubert McMorrow, Chairperson of the Leitrim Guardian Committee addressed the large crowd by paying tribute to those who have contributed to the publication through its rich history, right up to this year’s 43rd edition.

Remembering those who are no longer with us Hubert said, “We remember those who made a huge contribution over the years who have passed away and we think of them. There are people from Leitrim who are doing great things, not just here but further afield.”

Blaithin continued by thanking those who have contributed to this year’s publication saying, “We had a bumper submission this year, especially for the young writer’s competition. Without those writings it wouldn’t continue. We can be optimistic after reading these pages.”

Thanking the committee that ensured the publication of another comprehensive review of life in Leitrim, Blaithin said, “I am honoured to be part of the team that put this piece of history on the shelves.”

Prior to last year’s Leitrim Guardian Person of the Year, Eleanor Shanley and editor Blaithin Gallagher making a presentation to this year’s recipient, Frank Brady, Blaithin paid tribute to the Manorhamilton native who has contributed hugely to the Leitrim community in his adopted New York.

“Frank Brady is truly an ambassador for Leitrim. He has given amazing support to the Leitrim Guardian over the years. This award will only add to an already impressive mantelpiece.”

She also had a word of thanks for last year’s winner saying, “Thank you Eleanor, I’m sure you will continue to be an ambassador for the Leitrim Guardian in the years to come. We appreciate everything you have done.”

With family and friends present for his special night, Frank Brady recalled previous visits to the Ballroom of Romance, including one eventful night when he brought his now wife Helen to Glenfarne on what he described as “an eventful night!”

Frank recalled an enjoyable night dancing and not getting home until 9am due to his car running out of petrol and then having to sleep in the car!

Continuing his relaxed speech, Frank referred to the American homecoming’ tradition saying, “This to me is one of the finest homecomings. There are Bradys, Rooneys, footballers, team mates and even an opponents or two,” he joked.

Frank concluded by thanking all who helped make the night possible for him. “I would like to thank the Leitrim Guardian for bestowing this award on me. I emigrated but in some ways I never left because I keep coming back. Thank you all for being here to support me and the Leitrim Guardian. I have picked up a few awards along the way, this definitely tops them all.”