Manor’s Mairéad is Co Leitrim’s Carer of the Year 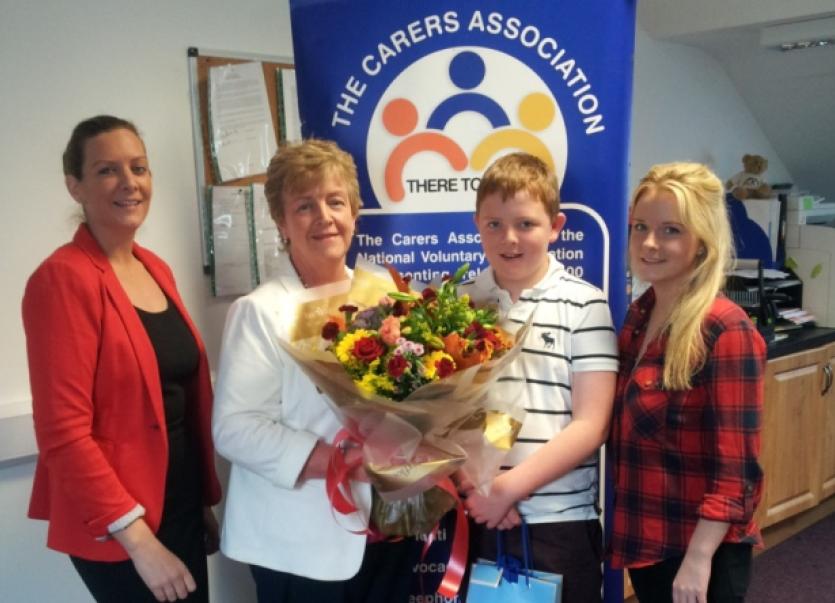 Following an unprecedented level of nominations for The Carers Association’s Carers of the Year Awards 2014, Mairead Feeley from Manorhamilton has been announced as Leitrim’s Carer of the Year 2014.

Following an unprecedented level of nominations for The Carers Association’s Carers of the Year Awards 2014, Mairead Feeley from Manorhamilton has been announced as Leitrim’s Carer of the Year 2014.

She was presented with her award at a special ceremony held in The Carers Association, Sligo and a meal in The Glasshouse Hotel.

Mairead has been caring for her mother Peggy Gilgun (90) for the past 15 years.Mairead’s mum has Alzheimer’s and after she was diagnosed, Mairead brought her to live with her husband and family in Manorhamilton. Mairead also looks after her three children and works in Casualty on night duty.

When she is not working she provides full time care for her mum and gets very little sleep herself.

Peggy needs to be fed, showered and turned in bed.

According to one nomination, “Mairead is always happy and never complains about all she has to do for her mum.”

Family carers provide high levels of care in the home to their loved ones, including older people, those terminally ill and with disabilities.

“Family caring is a labour of love and these awards are an opportunity to celebrate family carers” says Sarah McCaffrey of The Carers Association.

“The Leitrim Carer of the Year Award recognises the dedication and enormous contribution of the region’s over 1,450 family carers.

“We are delighted to present this year’s well deserved award to Mairead Feeley,” she told the Leitrim Observer this week.