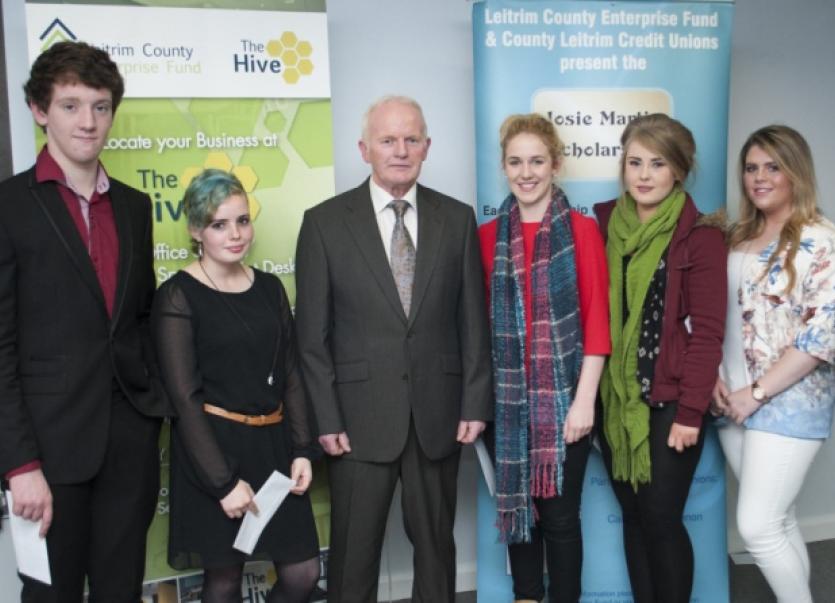 Seven lucky students throughout the county will be awarded €1,000 each from the Josie Martin Scholarship Fund in 2015.

Seven lucky students throughout the county will be awarded €1,000 each from the Josie Martin Scholarship Fund in 2015.

Rental accomodation is hard to get and very expensive for new college students, on top of that there are fees, communting, books and resources as well as food to think of - wouldn’t €1,000 be nice? well here is your chance to grab it!

This year the great news is that Manorhamilton Credit Union will also be awarding the scholarship in conjunction with the Credit Unions of Annaduff, Ballinamore, Carrick-on-Shannon, Carrigallen, Drumshanbo and Mohill.

The Scholarships are now in their eight year and are co-funded by the local Credit Union offices and Leitrim County Enterprise Fund.

The Scholarships were formed in memory of the late Josie Martin who greatly enhanced the establishment and development of the Credit Union movement throughout Leitrim.

Josie was also instrumental in the establishment of the Leitrim County Enterprise Fund, which provided low cost finance to the local business sector, at a time when credit was difficult to secure.

The scholarships bring these two organisations together to honour the Late Josie while assisting Leitrim students financially in achieving a third level education.

Since the establishment of the awards, €48,000 has been awarded to Leitrim Students, to assist them with the financial burden of attending third level education.

As always the local Credit Union continues to play a pivotal role in assisting both parents and students achieving their educational goals by providing crucial loan facilities.

This assistance is provided in a quick manner, at most competitive rates and has traditionally always been a strong core element of the Credit Union business model.

The local Credit Union movement is delighted again this year, to co-sponsor these scholarships as it also gives due recognition for the work that Josie Martin contributed to the establishment of the movement within the County.

Make a call to your local Credit Union and discuss how they can assist you in meeting the onerous cost of third level education.

The scholarships are awarded through an open draw process, with all applicants attending a recognised third level education institute having an equal opportunity to win. All applicants must be members of their local Credit Union and have sat their Leaving Cert in 2015.

Contact your local credit Union for more details and an application form.