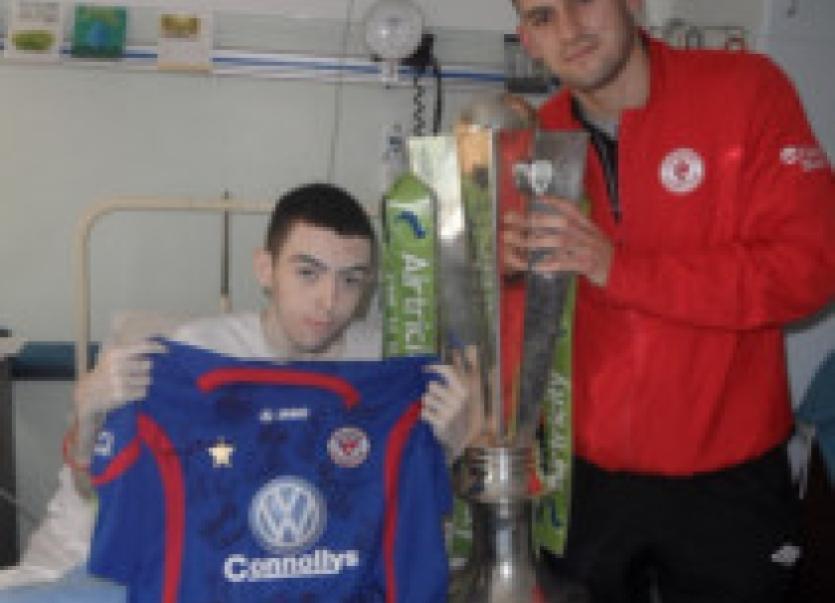 Twenty year old James Gill who has a rare liver cancer and is waiting on a “last chance” New York experimental treatment is said to be fighting strong despite a long spell in hospital recently.

Twenty year old James Gill who has a rare liver cancer and is waiting on a “last chance” New York experimental treatment is said to be fighting strong despite a long spell in hospital recently.

The heroic young man who has been suffering fibromellar hepatocellular carcinoma for the past three years had a surprise visit from Sligo Rovers and their Airtricty Cup on April 19.

The Leitrim Observer covered James’s story on March 1 this year which outlined his family’s plea for funds to help raise €80,000, for an experimental treatment in New York that could save his life.

His parents Geraldine and Drumsna native Declan Gill told the paper since the story was highlighted “James has become a bit weaker in health but his strength has got stronger in mind and he will not give up without a fight.”

They said “James can’t wait to go to New York and he says even if we have to carry him on the plane he’s going and will return back with a bigger smile on his face and wants us to throw the biggest party for him to welcome him back to Ireland.

“We as his parents would like to thank the Leitrim Observer for printing his story because it’s true cancer can be a pain in the bum for the patient and their family and it’s harder when you can’t do anything to help them, but now with so many people behind us I know we can help him to fight this cancer and also help others,” they stated.

Geraldine and Declan say that James has “taught us all a lot over the last two years and he is a great son and a wonderful brother to his two brothers and one sister. James has touched so many hearts and people are amazed by him.” They said “As a family we are so proud of him he’s our little hero and we love him dearly.”

The family thanked everyone for all their support in Leitrim, especially those who organised and attended fundraising nights and bought raffle tickets.

James wants to thank Sinead and Eamon Gill who ran a marathon for him, and to all the surrounding communities who gave money to the James Gill Fund.

You can keep up to date with events and follow James’ story on www.jamesgillfund.com