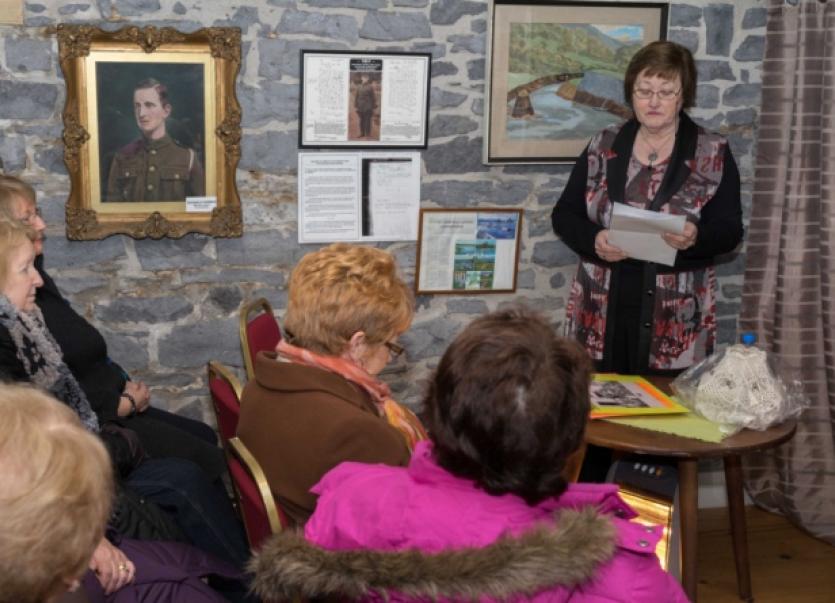 As part of the Carrick 400 celebrations in 2013, the Carrick-on-Shannon I.C.A. members, together with their President Marie Donohoe, made their contribution to that historic event.

As part of the Carrick 400 celebrations in 2013, the Carrick-on-Shannon I.C.A. members, together with their President Marie Donohoe, made their contribution to that historic event.

The ladies met weekly for several months at Marie’s home to collect, name and date a large collection of memorabilia spanning over 50 years.

In February 2014 the material was presented to the Carrick-on-Shannon & District Historical Society by President Marie Donohoe which was gratefully accepted by Historical Society Chair John Feely, the collection being a valuable source of local history relating to the I.C.A.

In her presentation, Marie gave an informative talk on the history of the Irish Countrywomen’s Association at local and national level since its foundation in 1907.

She emphasised the great input it had in bringing about change to the lives of Irish women, especially in rural areas. For the most part, in rural Ireland women’s lives were nothing short of slavery and drudgery, having no say in decision-making or in financial management.

Marie spoke of the I.C.A.’s efforts to bring about water on tap in the home and proper toilet facilities. She outlined the Association’s contribution, together with Horace Plunkett, in setting up the Co-operative Movement.

This helped women in rural Ireland to have access to markets whereby they could sell their surplus produce and get a fair price for it. Along with others, the I.C.A. had a hand in setting up the Credit Union system.

President Donohoe spoke also of the great craft tradition within the I.C.A. Indeed, many women excelled at their chosen crafts and went on to set up their own businesses and provided extra income for their families.

In more recent years, the I.C.A. has lobbied various government ministers, particularly on health issues and in the area of Breast Cancer Screening.

At the local level, the Carrick-on-Shannon I.C.A. have for 26 years assisted the Irish Cancer Society by staffing stands at five locations on Daffodil Day.

One hundred and four volunteers are recruited for this effort each year and rostered to collect much needed funds for this worthwhile cause, and the Branch is indebted to all those people who help out year after year.

The Carrick-on-Shannon & District Historical Society was extremely pleased to receive this substantial contribution to local history from the Carrick Branch I.C.A., and expects to mount an exhibition of the collection within the near future. Carrick Branch ICA welcomes new members.

Established in 1992, the Historical Society sponsors the Carrick-on-Shannon Local History Centre located in the Market Yard. The Centre was opened in May 2010 and houses over 1,000 items relating to Carrick and its environs.

The collections include books, papers, research work, parish histories, photographs, videos, and memorabilia which are available for the public to view. Donations of materials of interest to the Centre are welcomed, either as a permanent gift or on loan to the Society.

The Society also sponsors monthly lectures on topics of historical or local interest that are open to the public for a nominal fee. Membership in the Society is a modest €20 single or €25 family annually and entitles free admission to lectures and most other events.

The Local History Centre is in the process of establishing an extensive, cross-referenced database wherein a person looking for information on a particular topic or person will be able to find any references that the Centre has to hand. This major project is expected to be completed by end of July 2015.

Admission to the Local History Centre is free of charge (donations gratefully accepted), and it is open from 11 a.m. to 4 p.m. Wednesday through Saturday from April to October (closed on Saturdays in winter).