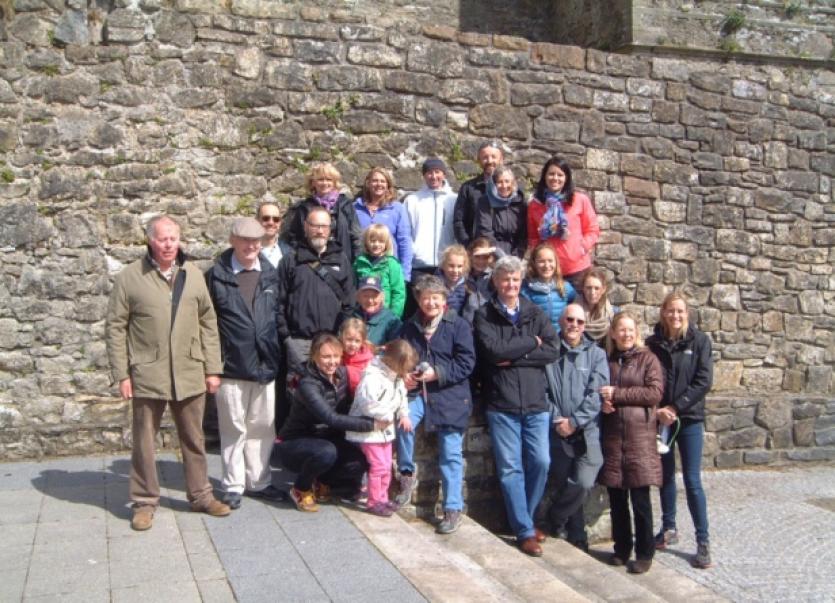 In 1667 Hugh Montgomery from Scotland was awarded 10,0000 acres in the civil parishes of Killargue and Creevelea in Co Leitrim for his loyalty to king Charles I and his son and heir, Charles II, during the turbulent years of the civil wars in England and the Confederate wars in Ireland of the 1640s.

In 1667 Hugh Montgomery from Scotland was awarded 10,0000 acres in the civil parishes of Killargue and Creevelea in Co Leitrim for his loyalty to king Charles I and his son and heir, Charles II, during the turbulent years of the civil wars in England and the Confederate wars in Ireland of the 1640s.

Hugh Montgomery duly set about building a castle in Belhavel near Killargue. Sometime in the mid 1700s the Montgomery male line became extinct and his eldest daughter became sole heir to the large property.

The most famous member of this family was Hugh Lyons-Montgomery conservative MP for Leitrim at Westminster 1852 until 1857.

This individual was high sheriff for Leitrim in 1849. He was known as an improving landlord during his time as MP at Westminster. He established a small factory near his residence and the nearby cross roads junction is still known by some people as the factory turn.

He had some roads rebuilt and improved in the local area and he also established a flour mill and a limekiln to be used by his tenants.

Hugh Lyons-Montgomery also had a local fair established at Belhavel It must be stated that a lot of local people were employed as servants and horse grooms etc at the big house.

Whilst as a sitting MP at Westminster, he had responsible for having a police barracks established in Killargue village later becoming a Garda barracks and now the local Post Office. He also founded the first post office in the area.

Hugh Lyons - Montgomery was responsible for building a remarkable residence.at Belhavel in 1849 using the stones from the former castle nearby.

A large number of his tenants were employed as labourers thus relieving some of the horrors of the famine from their families. In the following years Mr Lyons-Montgomery and his large family are supposed to have lived an extravagant lifestyle well beyond their means. When the land war and the non payment of rents by tenant farmers occurred in 1879. Mr Lyons- montgomery seems to have had little capital savings to fall back on.

He was plunged into debt and his house and estate were declared bankrupt in a Dublin High Court in 1880.

He, his wife and some family members, moved to France where he died a few years later.

By 1900 the big house was in ruins and was demolished by the land commission and the stones used for a new road.

The tenants got the opportunity to purchase their holdings through the Wyndham Land Act of 1903 and a lot of their descendants remain in the area today.

Last year members of the Lyons Montgomery family were tracked down through the internet and a get together was arranged for May 20, this year.

An itinerary to visit all the local places connected to the family locally down the centuries was arranged.

Upwards on 30 members turned up from places as far away as New Zealand, South Africa, New York, England and South America ranging in ages from 5 to 75 years old.

A particular highlight was a visit by the family to the Church of Ireland in Manorhamilton to view the church bell donated by a Lyons -Montgomery ancestor in the early part of the last century. The bell was originally located in Killargue Church of Ireland but when this church closed in the 1970s it was relocated to the Manorhamilton Church. A plaque in the church porch commemorates this event

The day finished off with a dinner in the Riverbank restaurant in Dromahair where a lot of family folklore and stories were shared among the guests.

The Lyons Montgomery family wish to pay a special word of thanks to Micheal Donaghue the present owner of the land where the big house once stood.

Micheal acted as host and guide for the day assisted by myself and cameraman, John Flynn.