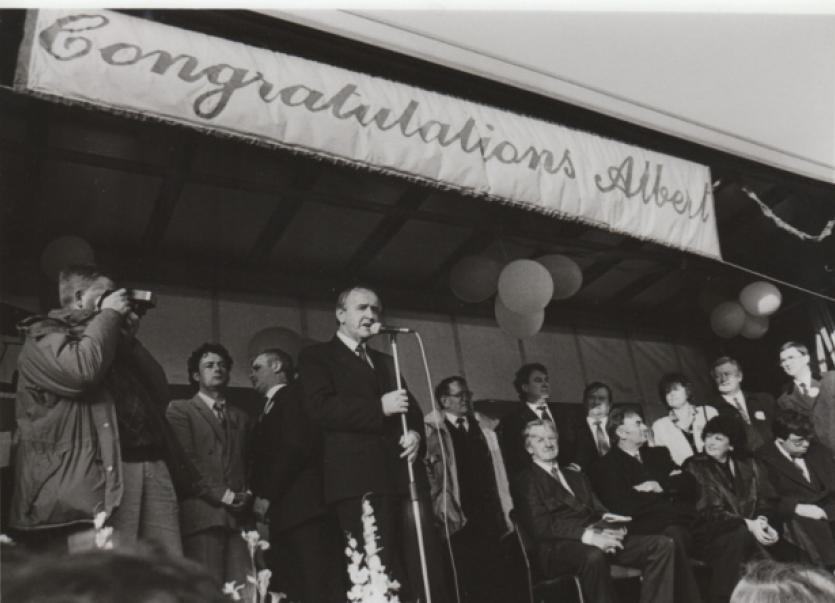 The tributes poured in last Thursday morning, August 21 on the death of 81 year old Albert Reynolds.

The tributes poured in last Thursday morning, August 21 on the death of 81 year old Albert Reynolds.

“As Taoiseach he played an important part in bringing together differing strands of political opinion in Northern Ireland and as a consequence made an important contribution to the development of the peace process which eventually lead to the Good Friday Agreement.”

President Michael D Higgins said, “Albert Reynolds will be remembered as a most dynamic Cabinet Minister and a Taoiseach with courage, who made a very important contribution to the dialogue which led to the Northern Ireland peace process. When I served in cabinet with him, I found him to be very supportive of many of the cultural initiatives which I introduced. I recall his great courtesy and relaxed manner in all our dealings on various issues. He was also a successful businessman and continually used his business contacts in his work on Northern Ireland.”

Cathaoirleach of Leitrim County Council, Cllr Paddy O’Rourke paid tribute to the fromer Taoiseach for his outstanding achievements during his term in office.

“There are undoubtly many people alive and well on this island today who would have perished in the conflict which had engulfed northern Ireland were it not for the courage determination of the late Taoiseach in bringing it to an end,” he said.

Cllr O’Rourke also saluted his achievements in negotiating huge traunches of EU funding which helped to kick-start the Irish economy in the mid 90s.

On a personal basis,the Leitrim County Council Cathaoirleach said he found the late Taoiseach to be a very engaging and patient person who gave generously of his time to everybody.

“With he having many relatives and personal friends here in Leitrim, we always felt a great affinity with [Albert] and hence the sense of loss is greatly felt at the passing of such a political giant.”

Cllr Sean McGowan said he was very saddened to learn of the death of Albert Reynolds.

He expressed his sympathy to his widow Kathleen and family, to his sister, Teresa Reynolds in Tooman, Gortletteragh and her family, to his brother Jim and his family in Longford, and to the family of his late brother Joe in Rooskey.

“We can’t forget the enormous contribution Albert made to peace in this island of Ireland. I was hugely impressed by the tribute of former Prime Minister John Major. His goal was always peace and he certainly laid the foundations for it,” said Cllr McGowan.

Chairman of Boyle Municipal Area and Roosky Councillor Eugene Murphy commented, “I knew Albert very very well and his passing brings great sadness to me. He never forgot this region and would always ask about people in the region when you would meet him.

“His involvement in the Peace Process can never be under estimated and I believe the whole story of risks he took in order to achieve this have yet not revealed. Remember less than 20 years ago in this country there was major killings and violence because of the Northern troubles. Albert was known as a tough business man and brought significant jobs through his own business interests to the region. Of course Albert brought great excitement in the early days to rural Ireland with his involvement in the Irish Country Music scene, creating jobs and business in many parts of the country.”

West Cavan FF Cllr John Paul Feeley said, “People my age and indeed many of all ages forget the change that has happened in this country as a result of the Peace Process. When Albert Reynolds became Taoiseach many were amazed to hear him speak of Peace at a time when the Troubles were rampant. His leadership and conviction to forge a strong relationship with then British Prime-minister, John Major was key to the preparation of the Downing Street Declaration. People of my generation owe Albert Reynolds a huge debt for his work for Peace. He brought is flair for business to politics, getting to the nub of the issue quickly and through his work such as extending the telephone network and establishing County Enterprise Boards made huge efforts to modernise the economy of Rural Ireland.’

Deputies Denis Naughten and Frank Feighan also paid their condolances. Feighan spoke on behalf of the Committee on the Implementation of the Good Friday Agreement.

Naughten said “While only personally knowing Albert in his final years in Dáil Éireann, I always found him to be good humoured with a jovial glint in his eye. I wish to express my sincere sympathy to his wife Kathleen, his family, the people of Longford and his neighbours in Rooskey where he grew up.”

Bishops Francis Duffy and Kevin Doran extended their prayerful sympathies to the Reynolds family. Bishop Duffy said “ Albert Reynolds will be remembered locally as a committed and sensitive politician who made a real difference to the lives of his constituents in our community and economy.”