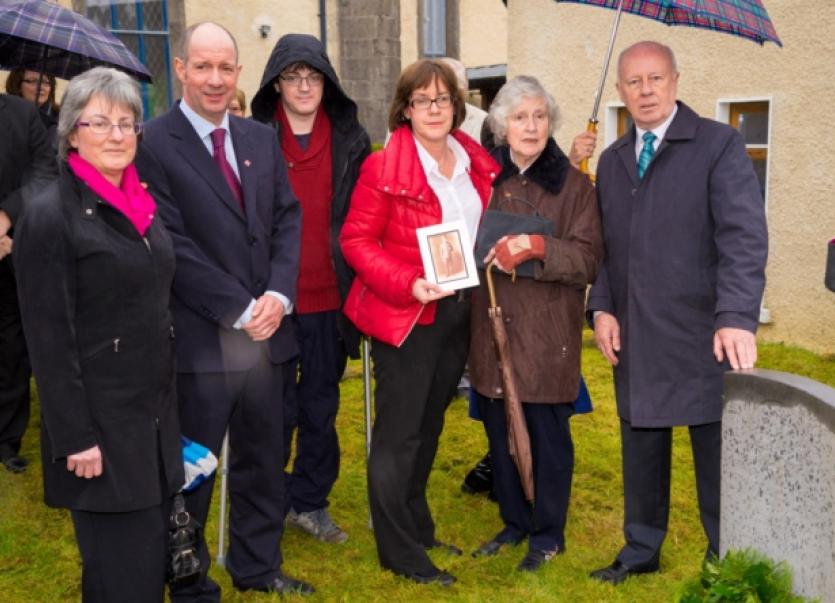 The province of New Brunswick in Atlantic Canada and The Provincial Archives of New Brunswick are proud to present an Exhibition commemorating two components of Irish history, which will run at St. George’s until 21st May.

The province of New Brunswick in Atlantic Canada and The Provincial Archives of New Brunswick are proud to present an Exhibition commemorating two components of Irish history, which will run at St. George’s until 21st May.

H.E. Loyola Hearn, Canadian Ambassador to Ireland, accompanied by his wife, were guests of honour at several events hosted by Leitrim Tourism, Leitrim County Council, the Carrick-on-Shannon Heritage Group, and the Chamber of Commerce on the 10th of April.

A large crowd attended the reception in St. George’s Heritage Centre and viewed the new exhibition, which was accompanied by the magical music of Mrs. Ruth Waller on the Church’s 1847 Telford Organ.

In a tribute to the many Irish men who served with Canadian Forces in the Great War, Ambassador Hearn laid a memorial wreath at the grave of Pvt. William ‘Willie’ Allen Laird (1882-1917) of Killukin, Carrick-on-Shannon, who served with the 14th Battalion Canadian Infantry.

Members of the Laird family were in attendance at the wreath laying. Several families at the reception had brought along sketches and paintings of relatives who participated in the War.

The Carrick-on-Shannon & District Historical Society was pleased to include a painting of Charles Reginald Harman who was killed during the War which had been donated by the Harman family represented at the reception by Mrs. Patricia Harman.

John Bredin, Chair of the Heritage Group said “It is with great pleasure that we have the company of Ambassador Hearn to give formal recognition to all those who volunteered for service during that horrific period, more than 100 of whom were from Leitrim.

“We invite you all to see the banners within St. George’s listing the names of most. They will not be forgotten, and I must thank Padraig Griffin for the huge research he has done in this regard….”

One exhibit entitled, “In the Wake of the Dark Passage”, deals with the impact of the Great Irish Famine of 1847 which led 30,000 immigrants to New Brunswick, Canada.

This display examines the nature of shipping in the 19th century and the rights and treatment of passengers aboard emigrant vessels.

The accompanying exhibit entitled, “An Honourable Independence – Irish Immigration and Settlement in New Brunswick, 1815-1855,” illustrates the migration and settlement patterns of Irish immigrants in the province and their experiences and contributions to Canadian society.

Historical photographs, documents, maps and census data, all drawn from the Provincial Archives, are showcased in this display.

Together, these displays provide a comprehensive and detailed exploration of the Irish immigrant story in early New Brunswick.

Irish history and heritage has been a theme of wide interest in the province where over 38 per cent of our population is of Irish descent.

Both exhibitions arrived in Ireland in September 2013 to be a focal point at ‘Canada Come Home’, one of the Flagship Gathering events in Co. Wicklow which attracted hundreds of Canadian visitors to the event in Coollattin House, former home of the Earls Fitzwilliam.

‘Canada Come Home’ celebrated the lives of all those who left Co. Wicklow for a new life in Canada and in particular the 6000 who were cleared from the Fitzwilliam Estate.

This is the third time that the Provincial Archives of New Brunswick has been called upon to help mark Irish history. In 1997, the Archives took part in the 150th anniversary of the Great Irish Famine which was the focus of several museum exhibitions in Ireland.

Then, in 2006 as part of the first Celtic Festival by Sea, the exhibits were featured at the Inishowen Maritime Museum in Greencastle County, Donegal, The New Brunswick exhibit then moved to Derry/Londonderry, and was at the Harbour Museum in time for the annual Colmcille Lecture.

The “Dark Passage” exhibit was also shown at the National Famine Museum in Strokestown, the Derry Workhouse Museum, the Maritime Museum in Dun Laoghaire, and the Monaghan County Museum.

The Heritage Group is thankful to Lynne Reece Loftus and the staff of the Canadian Embassy in Dublin for facilitating the events.

The Exhibition will continue at St. George’s Heritage & Visitor Centre until 21st May. The Centre is open daily from 10 a.m. to 5 p.m., and from the 4th of May on Saturdays. For further information or to arrange group tours, please ring 071 962 1757.