Double success for McGoldricks in Tullamore 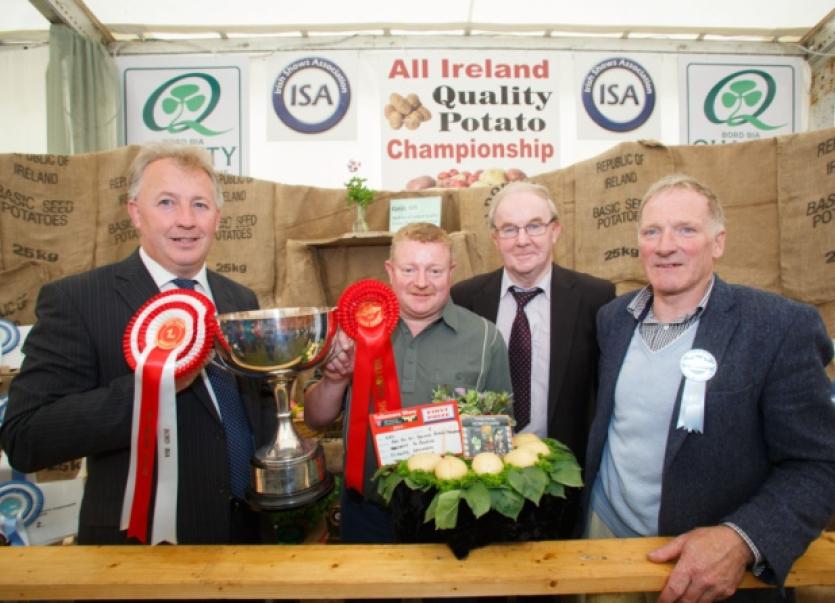 There was success on the double for the McGoldrick family from Kilcoosey, Dromahair at the recent Board Bia All-Ireland Potato Championship in Tullamore.

There was success on the double for the McGoldrick family from Kilcoosey, Dromahair at the recent Board Bia All-Ireland Potato Championship in Tullamore.

Margaret McGoldrick claimed first prize in the prestigious competition while her son, Michael, was awarded third prize at the competition which was held on August 10.

This competition has been up and running since 1992 with the aim of the competition being to increase the level of awareness especially among mature growers of what constitutes a good quality potato.

Competitors are asked to present a dish of six potatoes for both the qualifier and the final itself. The potatoes should be free from any skin blemishes, uniform in shape, weigh approximately 6 ounces and have nice shallow eyes and the overall exhibit should look well.

Explaining what the process involved in producing award-winning potatoes Michael told the Leitrim Observer, “It is very hard, strenuous work preparing from start to finish for the final.” Michael starts off in February buying the moss peat, polypots (these are pots made from polythene with drainage holes in them).

Those are used for growing the potatoes in, the fertilizer and of course the seed potatoes when the seed potatoes arrive, they are washed and dried with kitchen paper. They are then checked for any skin blemishes, scabs etc also for size and shape. The selected seed are then placed rose end up (the side with the eyes) in seed trying to chitt. They are then placed in a cool dark room and left there for a few weeks.

“When the new shoots on the tubers are approximately one inch long they are then ready to be planted in the polypots. In the mean time the moss plant has been put through a garden shredder to break down any big lumps that might be in it. If this was not done when the new potatoes are developing they may be deformed in the bags.”

Michael explained, “The compost and fertilizer are mixed together and then it is placed in the polypots. When all of the pots are filled and get the already chitted potatoes and plant one in each pot. The pots are then planted in trench 6 deep x 18 wide when the row is completed, I then fill back the soil around the pots to keep them in place during the growing season. The foliage has to be regularly checked for aphids which can cause a virus in your potatoes. Also blight can take hold if you don’t spray to protect them. At the end of July two weeks before the final, the haulm’s are cut off. The polypots are then lifted with the potatoes and peat intact and placed in a cool dark shed for the peat to dry out.”

This gives a better skin finish to the potatoes and they can be washed easily without breaking the skins. Two days before the All-Ireland Final, I start to grade the new potatoes as they are being taken from the polypots. All the six ounce potatoes are kept one side and doubly checked with my digital scales.

Once I have selected my top six tubers they are then washed with a soft sponge and carefully wrapped for the journey to Tullamore. On Show Day each tuber is carefully placed on a dish with the eyes of the potatoes facing out. The exhibit is then decorated with potato leafs and parsley to add to the presentation and the name of the variety is placed on the dish. The final step prior to judging is for the potatoes to be placed with all the exhibits in the All-Ireland Final.

Describing the success he and his family have enjoyed Michael said, “It has been a tremendous honour to bring the All-Ireland Cup back to County Leitrim and in particular the village of Dromahair.”