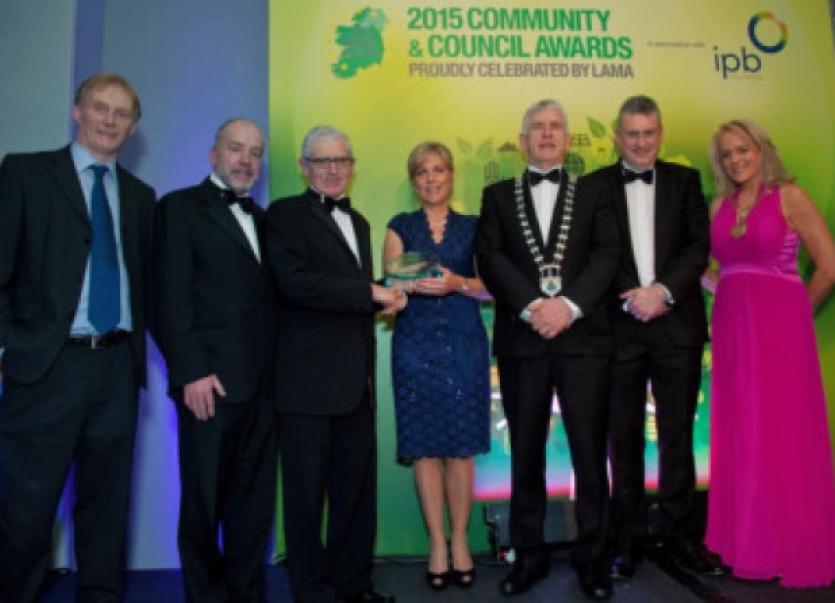 Only three months since its launch in October of last year, Leitrim’s latest tourism project has already collected its first award. The Shannon Blueway received the award for Best Tourism Initiative at the LAMA (Local Authority Members Association) Awards which were held in Dublin on Saturday night last.

Only three months since its launch in October of last year, Leitrim’s latest tourism project has already collected its first award. The Shannon Blueway received the award for Best Tourism Initiative at the LAMA (Local Authority Members Association) Awards which were held in Dublin on Saturday night last.

The Blueway is a developing, multi-activity trail running alongside water which links walking, cycling, canoeing, paddleboarding, fishing and cruising with local towns and villages.

Launched in October, thousands of walkers, paddlers and cyclists have already enjoyed this first section of the trail from Drumshanbo to Carrick-on-Shannon which includes over 16 kilometres of canoe trail and ten kilometres of approved walking route.

The project beat off competition from Longford, Cavan, Antrim, Mayo, Galway and Cork. These include the World War One Trench Experience at Cavan County Museum, the Walk Way along the Royal Canal in Longford and Cork’s portion of the Wild Atlantic Way.

There are over one hundred kilometres of water trails radiating from Carrick-on-Shannon which link these existing walking trails and to which Waterways Ireland has added national loop walking trails along the Lough Allen Canal in partnership with Failte Ireland and Leitrim County Council.

The Blueway builds on the huge potential provided by the existing waterway infrastructure. This is enhanced by the geography of the area with Carrick-on-Shannon, Drumshanbo, Leitrim Village and Dromod all closely located along the waterway.

This also makes the Shannon Blueway immensely attractive for short duration activity breaks. The amenity also offers a wide range of affordable pursuits in a safe and friendly family environment.

Waterways Ireland and Leitrim County Council are in the process of seeking to provide a connection from the jetties at Acres Lake in Drumshanbo to the local canal towpaths. They are also seeking to complete a walking/cycling connection to Carrick-on-Shannon, particularly facilitating access to the main accommodation providers in order to attract as many visiting groups and clubs to the area.

Initially, the Blueway will be developed between Carrick-on-Shannon and Drumshanbo, but it is hoped to extend the amenity west, towards Lough Key and Boyle and also east towards Rooskey to eventually connect with the Shannon/Erne Waterway. While a new section of the Shannon Blueway is set to open later this year on the Camlin River.