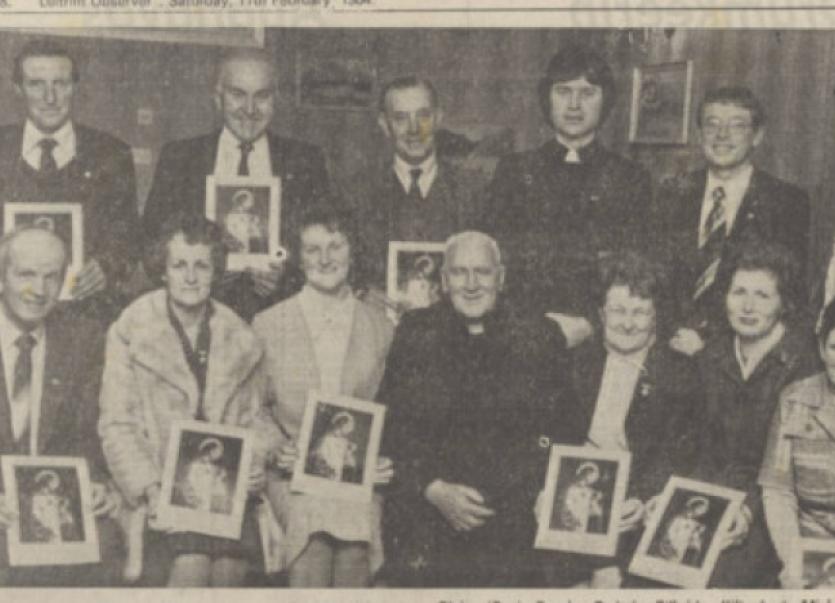 Next Sunday, July 27 Kiltoghert Pioneer Centre will celebrate the centenary of their Abstinence Association.

Next Sunday, July 27 Kiltoghert Pioneer Centre will celebrate the centenary of their Abstinence Association.

This is a very special occasion for the entire parish as pioneers and non-pioneers commemorate all those who participated in the centre and continue to do so.

The celebrations are two fold, religious in honour of the Sacred Heart, and a community get together with dinner and the centenary booklet launch in The Bush Hotel to round off an historic day.

At the end of Mass the members will unveil the centenary plaque kindly donated by Attracta O’Connor, the centre’s secretary, to mark the occasion.

At 8pm there will be dinner in The Bush Hotel, before Mickey Harte, Tyrone GAA Manager will launch the centenary booklet.

Past members of the centre from Dublin, Mayo, Sligo, Roscommon and all over Ireland will also be joining the historic event.

The Kiltoghert Pioneer Centre was established on July 28, 1914, around the same time that World War I broke out. Unfortunately there are no records from this period, but it is understood the centre struggled for a number of years although it did continue through 1916, the civil war and into the 1930s when records begin to emerge.

From the 1930s it continued only breaking up for a year or two. The centre has operated constantly since 1979.

The centre covers a large area including Kiltoghert, Leitrim Village, Jamestown, Gowel, Kilnagross and Carrick-on-Shannon. As it currently stands the centre has 125 adult members and almost 100 juvenile and youth members.

Children join from age 11 and it usually corresponds with Confirmation.

The Irish Pioneer Association was founded by Fr Cullen and four ladies in Gardiner St on December 28, 1898.

Current President of Kiltoghert Pioneer Centre is Sean Murray, he has held the honorary position since 1979.

He explained that youth that join participate in a number of activities run by the centre each year, at 18 years of age the member receives their pioneer pin and can go on to receive a Silver (25 years) pin and Gold (50 years pin).

There is also a Father Cullen Medal which is presented to members who are pioneers for 60 years.

Sean Murray said the parish is proud to celebrate the pioneer centre’s centenary and he said he hopes it continues into the future.

Past and present pioneers can read the full history and see photos of members and leaders in the booklet which was edited by Sean Murray, Brendan Kiernan and Attracta O’Connor and will be on sale on July 27th. It would make a lovely gift and memory for people from around the parish.