A milestone in history 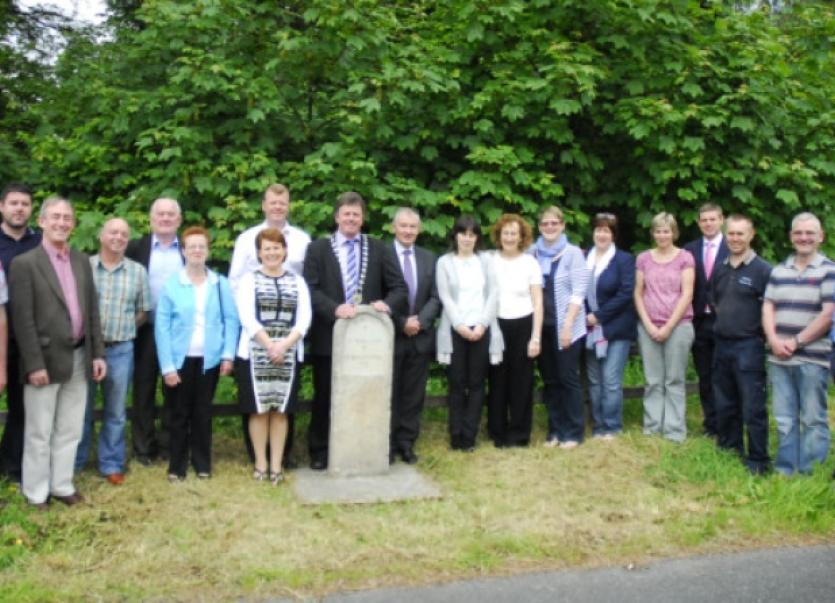 It is estimated there were once over 300 milestones marking the journey on Leitrim’s roads, but only a handful have been restored.

It is estimated there were once over 300 milestones marking the journey on Leitrim’s roads, but only a handful have been restored.

Last Friday, May 30, Cllr Sean McDermott performed his last official role as Cathaoirleach at the launch of the restored Cornacreegh milestone, one mile outside of Ballinamore.

Former County Librarian Sean Ó Súilleabháin explained that the milestones which were built and erected in the 1850s by the Grand Jurys (before Co Councils) were located every mile on some of Leitrim’s main roads.

They gave distance information to some of the main towns in the area as the majority of people would be walking or on a horse and cart.

The historical stone carved structures were buried during World War II at the request of the Department of Defence to deceive any army if they invaded and not to reveal their location in the country. Only a handful have been rescued and restored to their rightful location.

Michael McGovern who lives at Cornacreegh said his father John told him about the stone as he had helped bury them.

So when the roadworks started to widen the Ballinamore - Carrigallen road ten years ago, Michael told the workers and found his father had been “spot on” with the location of the stone on Michael and Sheila’s land.

Mary Conefrey from Ballinamore Library explained that there are a number of restored milestones around the county, she said they would like the public to be aware of these stones if they are doing any work along the roadside.

She paid tribute to everyone who supported this project and to Smith Monumentals who restored the writing.

Sean Ó Súilleabháin said these stones were once all over the country and noted that in Carrick, Kilclare, Manorhamilton, Newtowngore, Leitrim Village and other areas have the stones restored. He said some of the stones were dug up “50 years after they were buried.”

He explained that the 1911 ordnance survey of Ireland shows the location for each milestone so it could be possible to dig up the majority of the stones.

He said they should be considered as listed monuments, Martin Dolan from Leitrim County Council agreed and asked the public to be aware of these stones along main roads.