Opening of new family cycle and walking trails at Glenfarne 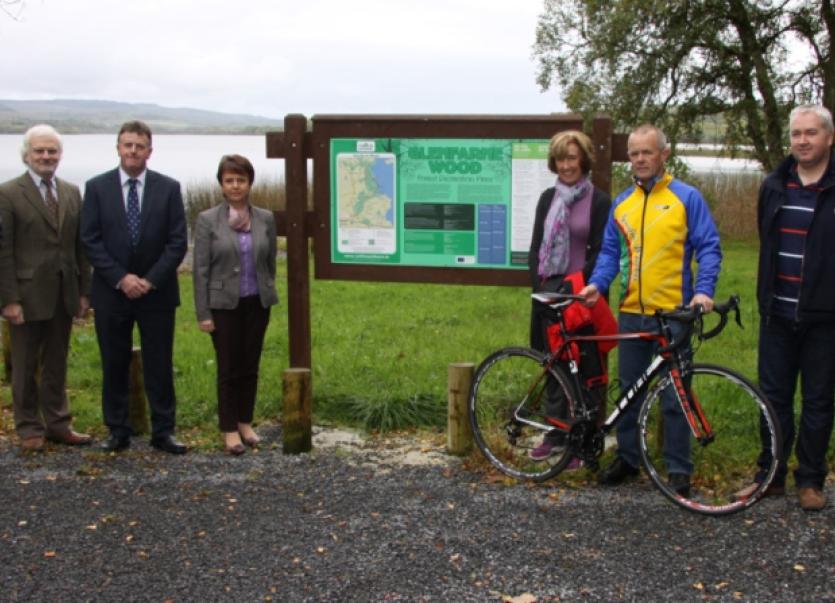 The launch has taken place of a four kilometre walking and cyling trail in Glenfarne along the western edge of Lough MacNean.

The launch has taken place of a four kilometre walking and cyling trail in Glenfarne along the western edge of Lough MacNean.

This project in combination with others including the nearby project at the Coillte Cavan Burren Park will act as a catalyst for private sector investment in new businesses and create an opportunity for entrepreneurial activity in the area.

Enhancement of the environment and infrastructure, combined with economic and enterprise support initiatives, will have a positive impact to the local economy.

The project involved the upgrade of four kilometres of a forest road network to a looped family cycle trail. The walking trails were also upgraded and way marked.

These trails offer splendid views of the lake and surrounding countryside.

You can also stop off and enjoy the sculptures installed in 2000 as part of a cross border millennium project.

One of the sculptures “Reflectress” (Anna Macleod) is sited at Ladies Rest, where the ladies of Tottenham Hall used come to swim and relax. It represents the hooped skirts of the era.

Another one “Point of Contact” (Derek Whitticase) at Island View represents the two chemical symbols for hydrogen and oxygen, separate in their own right, but when combined, create water.

The car park has also been upgraded. Picnic units were installed including one to multi access standards.

A new map board contains information on the site as well as the details for each trail.

The project was managed by Martin Ruane, Coillte Recreation manager for the locality in co-operation with Coillte Operations manager Martin Joyce.

Coillte availed of funding for the above project at its forest property at the Demesne Glenfarne under European Union Priority 2, Theme 1: Rural Development.

The funding is managed by the Special European Programmes Body (SEUPB).

HNR aims to build on cross-border opportunities by promoting a shared approach to rural regeneration through tourism, enterprise and social development.