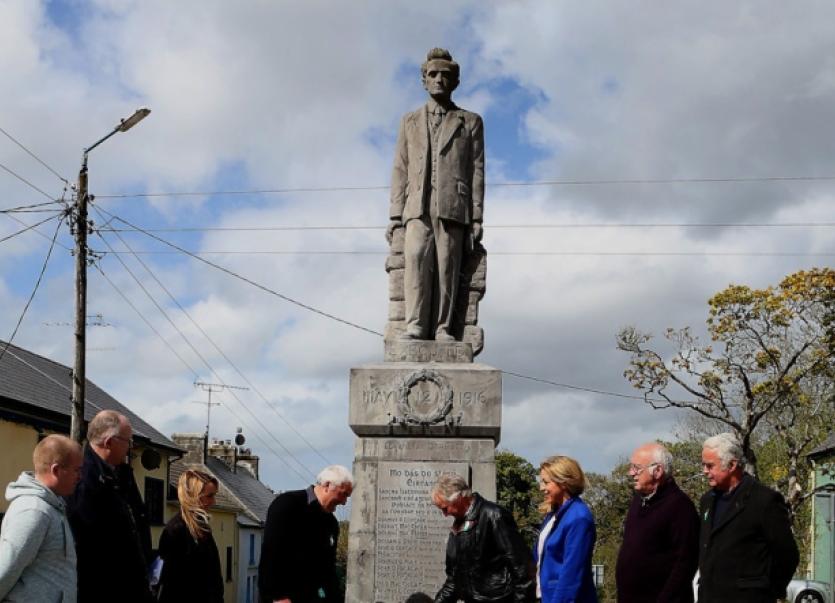 A large crowd braved the torrential rain in Kiltyclogher on May 10 to commemorate the 99th anniversary of the death ofSeán MacDiarmada.

A large crowd braved the torrential rain in Kiltyclogher on May 10 to commemorate the 99th anniversary of the death ofSeán MacDiarmada.

The parade was led by the Strabane Martyrs band and the Four Green Fields flute band from Carrick-on-Shannon to the Seán MacDiarmada memorial in the town centre.

Addressing the crowd Cllr Kenny said: “This time 100 years ago MacDiarmada was plotting and planning revolution with Tom Clarke and others in the IRB. The question he asked of the volunteers he met around the country was a simple one, “Are you Free or are you a Slave?

“It was in this provocative manner that MacDiarmada inspired the young men and women of the Volunteers and Citizens Army to rise in Easter week and make a stand, not for the past and all the wrongs inflicted on Ireland, but a stand for the future of Ireland and of its people.”

“The hard reality is that banks have been the biggest gainers from austerity, with the Central Banks printing money for them and this is no accident, it is designed that way. The recovery the Government talk of is just another type of bubble, only this time it based on Apple, Google, eBay, and a host of other multinationals logging revenues through Irish shell companies with special deals on taxes,” he said.