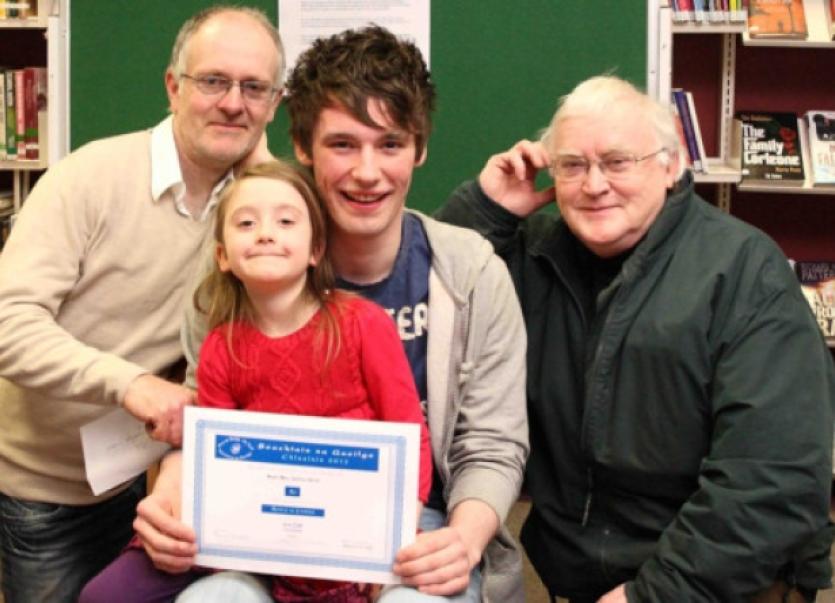 As part of Seachtain na Gaeilge, Glór Chluainín organised two competitions and on Tuesday, March 26 in the Cluainín Library they presented the prizes.

As part of Seachtain na Gaeilge, Glór Chluainín organised two competitions and on Tuesday, March 26 in the Cluainín Library they presented the prizes.

In the Irish Language Window Display Competition, Adjudicator Seán Ó Súileabháin presented the Granary with €100 and a certificate for first prize and €50 and a certificate to Thornton’s Butcher for the second prize. He also gave high praise to the Bank of Ireland, who won last year, for the effort pupils from Gaelscoil Chluainín made in decorating their three windows again this year and that he hoped for greater participation by even more shopkeepers next year.

He also spoke of the importance of the Irish Language to our cultural identity and he praised all those in Cluainín who chose to present their shop front signs in Irish.

Before wrapping up he mentioned that any others who may wish to avail of the Foras na Gaeilge bilingual signage grant they should do so before May of this year.

In the competition for the best Irish language Essay, adjudicator Proin Ó Duigneáin awarded Niall Mac Giolla Léith with €50 and a certificate for first prize for his essay on the future of the Irish Languge.

He praised teacher Niamh Nic Aogáin for the standard of the Irish amongst all the participants. Proin said that next year there would be two competitions for creative writing next year for pupils U18 and U15.