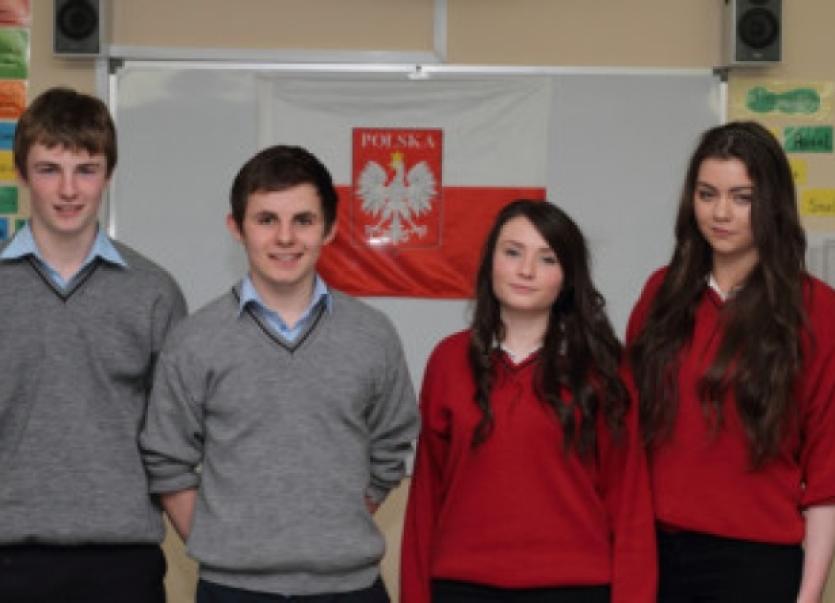 Four students from Ballinamore PPS are submerging themselves into Polish culture this week as part of an RTE documentary to compare the Polish education system to the current Irish curriculum.

Four students from Ballinamore PPS are submerging themselves into Polish culture this week as part of an RTE documentary to compare the Polish education system to the current Irish curriculum.

Ballinamore PPS was one of three schools chosen for the documentary. The school was selected because it represents a small rural secondary school in Ireland, the students from Ballinamore have been teamed up with a similar sized school in Smardzewice, Poland. The Ballinamore students will be the first to test the system, students from schools in Limerick and Kells are being sent to Spain and Finland for the same objective in May.

Brian Deering and John Joe McGovern from Swanlinbar, Cianna Stringer from Aughawillan and Kayla Galligan Maguire from Drumreilly will attend school for five days in the central Polish town.

They will take classes, mix with students and even live with Polish families in an effort to compare school life for teenagers in Poland and Ireland. The differences in education will be observed from the students perspectives. In essence it is an investigate journalism series, with the students currently experiencing the Irish education system commenting on the differences between the two countries. Esras Films have told the school they have a “blank canvas” and no predisposed ideas of the final outcome.

RTE filmed the students in Ballinamore PPS and packing and leaving their families last week.

To be selected for the trip, the students had to apply, produce a video on their mobile phones and participate in interviews with Esras Films. The trip is an all expenses paid opportunity for Brian, John Joe, Cianna and Kayla who were chosen from 20 Transition students in the school.

John Joe said he believed the four of them were picked for their “tv faces!” The students are expecting to go “back in time” as the understand that technology in education in Poland is ten years behind the Irish system. They have no projectors, use black boards and the Polish students don’t use laptops.

They understand they will be attending classes taught through English, they expect that each of them will compare different classes for the documentary. They said they will be able to experience PE and other classes that is not incorporated in the curriculum here.

The students have been getting some language tutoring and learning about Polish culture from two Polish students in Ballinamore; Weronika Wiezsniewska and Paulina Nawrocka. The girls said the students can expect a much “higher level of education in Poland.” They said school is “harder with more exams.” They said Polish teachers do not give as much explanation as they do here. School classes start at 7am and finish around 2.30pm. The Polish girls also said that the English accents may be difficult for the Ballinamore students to understand.

The four confident Ballinamore students said they are going over with “open minds” and are looking forward to seeing the advantages and disadvantages between the two education modes. They will be giving their opinion each day on events to the documentary team speaking about the classes, family life and the youth social life, but said they don’t expect it to be like Big Brother or Tallafornia!

The students are preparing for the cold weather, forecasts were giving as low as -15c for Smardzewice, Poland this week. The teenagers are also looking forward to socialising with the Polish students, they have been told there are no youth discos unless one is organised by the school, so they can expect to go to the cinema and hang about the town. But the students feel the cold may deter them from “hanging outside!”

The documentary filmed by Esras Films who produced the series on district nurses last year is expected to be aired this Autumn. The students along with their teacher Robert O’Reilly flew out on April 3 and will return back on April 13.