Finding Francis Mulvey with the help of the Leitrim Observer 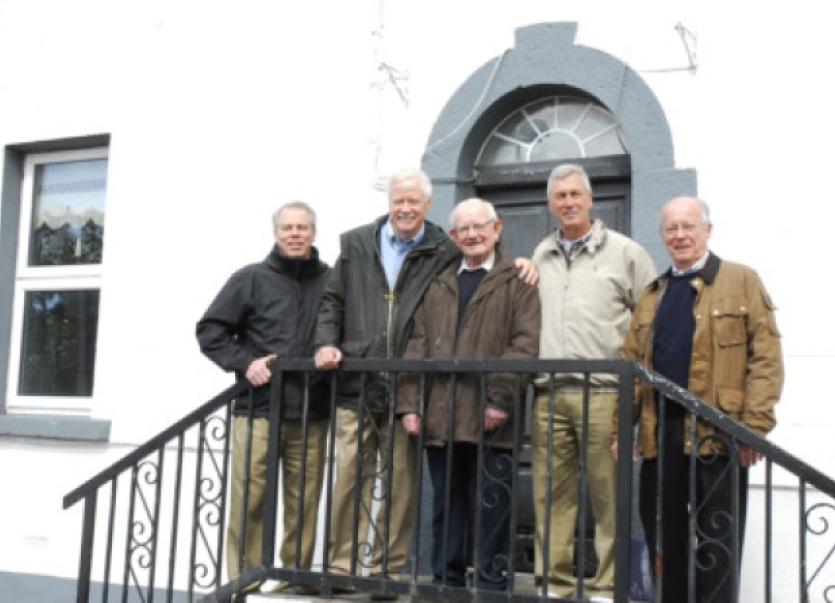 It’s a 100 year old mystery, but the descendents of the former owner of the Leitrim Observer are determined to unravel the mystery surround the fate of their ancestor, Francis Mulvey.

It’s a 100 year old mystery, but the descendents of the former owner of the Leitrim Observer are determined to unravel the mystery surround the fate of their ancestor, Francis Mulvey.

A prominent businessman, leading charitable contributor, printer and family man, Francis remained in the public spotlight right through the late 1890s and into the early 1900s, but then, he simply vanished from both the records of the paper and from the lives of his second wife and children.

Recently his Great-Great-grandsons, William, Alfie, Peter and John Bucknall, descendents of Francis and his first wife Margaret Williams, came to Co Leitrim to try and solve the mystery.

“We just want to find out what happened to Francis,” explained William to our reporter during their visit to the county town.

“We know that he owned the Leitrim Observer, we know that he married twice and had two families. We know that his second wife ended up living in America and we know that the paper was sold to the Dunne family for £150 in the early 1900s, but we just don’t know what happened to Francis. It’s as if he just disappeared. There is no mention of his death in the paper. There is no death certificate and there is no record of him ever entering America. It’s a total mystery and it just seems so odd that such a prominent businessman could disappear without a trace, but he has.”

From what researchers at the Leitrim Genealogy Centre have been able to establish, Francis was always a bit of a mystery. He is one of at least nine children born to Thomas Mulvey and Margaret Lenehan. The couple had a set of triplets baptised in Kiltoghert RC parish in January 1861, John, Thomas and Bridget. They were followed by five further children baptised in Aughrim RC Parish, Co Roscommon, Margaret (April 1866); Patrick (March 1869); Michael (February 1872); Joseph (May 1874) and Mary Anne (December 1876). Although no baptism record was found we know that Francis Mulvey was born to this family and on August 15, 1878, at the age of just 21, he married 25 year old servant, Margaret Williams in Carrick-on-Shannon RC Church. At the time Francis is listed as a shop assistant, but just six years later he is listed on the birth certificate of his son, John Joseph, born May 22, 1884, as a printer. The birth was registered in the Jamestown Civil District.

John is the only child found to be registered to the couple and sadly, Margaret Mulvey passed away on July 14, 1894 from severe gastritis lasting three weeks.

An obituary was run in the Leitrim Advertiser of July 19,1894 stating that Margaret was buried in Sligo. Interestingly research into the Sligo family links for Margaret revealed that she had another child, Francis, who was born in August 1879, to her and Francis, who was named after his father. Research shows that he later boarded with the Dunne family, the subsequent owners of the Leitrim Observer, long after the disappearance of his father.

Francis Mulvey senior went on to remarry, taking Catherine Josephine Duignan as his second wife on February 23, 1903 in St Mary’s RC Church, Carrick-on-Shannon. We know that, at this stage, Francis had moved on from the profession of printer, to become the owner of a newspaper.

Catherine and Francis went on to have three children recorded to them in the Co Leitrim Civil records, Francis born in August 1904; Mary born in September 1905 and Jane born in December 1912. No further birth records were recorded at this time but the couple definitely had more children as by the 1911 Census, they also had a son Philip, born in 1909 and a daughter, Kathleen, born 1911. It appears that by this time, that their third child, Jane, had died as there is no further record of her.

We know that at some time in between 1909 and 1915, the Leitrim Observer was sold to Pat Dunne, however, strangely enough, there doesn’t appear to be any firm date for the sale.

Even stranger, despite there being numerous mentions of Francis Senior attending local functions and serving on various community boards in Carrick-on-Shannon in the early 1900s, by 1910 there is no mention of him at all and his wife Catherine, replaces him as the contact for booking for the White Star shipping lines and for printing works at the Leitrim Observer.

Catherine herself is a bit of a mystery as well. She disappears from Carrick-on-Shannon some time after the 1911 Census. The next mention we have of her is a record of her boarding the Lapland, a ship out of Liverpool, England, bound for America. It arrived in Ellis Island, New York on November 22, 1915. In the manifest Catherine is described as having a dark complexion with dark eyes and brown hair. She is 5ft 4 inches tall and is marked as travelling to the home of her Aunt, a Mrs Eccles of 103 Claremont Ave, Jersey City.

Sadly none of her children are travelling with her and although she is noted as married, not widowed, in the manifest, she is also travelling without her husband Francis and, from this point in her life, she is never mentioned with him again.

Despite the fact that she should have been a relatively wealthy woman following the sale of her husband’s paper to the Dunne family for £150, Catherine must have been in dire financial straits by late 1915 as she and her sister had to pay her passage to America and she travels as a regular passenger. More telling is the fact that she does not send immediately for any of her children and it is not until 14 years later that she is reunited with one of her children, Philip, who moves to America in 1929 - he was just six when his mother emmigrated, leaving him behind in Ireland with his surviving siblings. It would appear that Francis and Catherine’s children were passed to other guardians and family members to be raised following the emigration of their mother and the disappearance of their father.

John Joseph Mulvey, the son of Francis Mulvey Senior and his first wife Margaret Williams also ended up in America, emigrating in 1905 where he married Elizabeth Beirne in 1914. They went on to have four children, Veronica, Constance, Eleanor and John V. John Joseph died in New York in April 1948 and he remained of such importance locally, that his obituary appeared in The Leitrim Observer in May 22, 1948. What makes it even stranger is that no record was found of his father’s death in the paper.

The four Bucknall brothers are descended from John Joseph and Elizabeth and remain steadfastly proud of their Leitrim connections.

“I feel a very strong connection to this area and seeing the building that my ancestor owned, the church he was married in and copies of the paper he owned, but we would love to discover what happened to Francis Mulvey. Did he die and if so, when? He couldn’t just disappear. It seems incredible that he has,” said William Bucknall.

Even meeting a descendent of the brother of Catherine Duignan (the second wife of Francis Mulvey) has failed to shed light on the mystery. Tony Duignan and his son Bryan travelled from their home in Galway to meet with the Bucknall brothers in Carrick-on-Shannon last month.

He produced a photo showing Mulvey’s, descendants of Francis Mulvey and Catherine, who came home from America to visit his father’s family in Carrick-on-Shannon in late 1950s when he was a very small boy.

However he cannot name the two men and teenage youth who accompanied them.

“I remember they said they were Mulvey’s from America, but I cannot remember any names and we never heard from them again,” said Tony.

“It’s a complete mystery for us all. We’d love to hear from anyone who may have any light to shed on Francis and what happened to him. No one can just disappear without a trace, certainly not someone who was such a prominent and well known figure here in Carrick-on-Shannon. This is one mystery we are determined to solve,” said William Bucknall.

Anyone who may be able to shed light on what happened to Francis Mulvey Senior or, indeed, on his descendants through his second wife Catherine, who ended up in America in 1915, are asked to contact the Leitrim Observer on (071) 9620025 or via email lmckiernan@leitrimobserver.ie and we’ll pass on your details to the Bucknall and Duignan families.