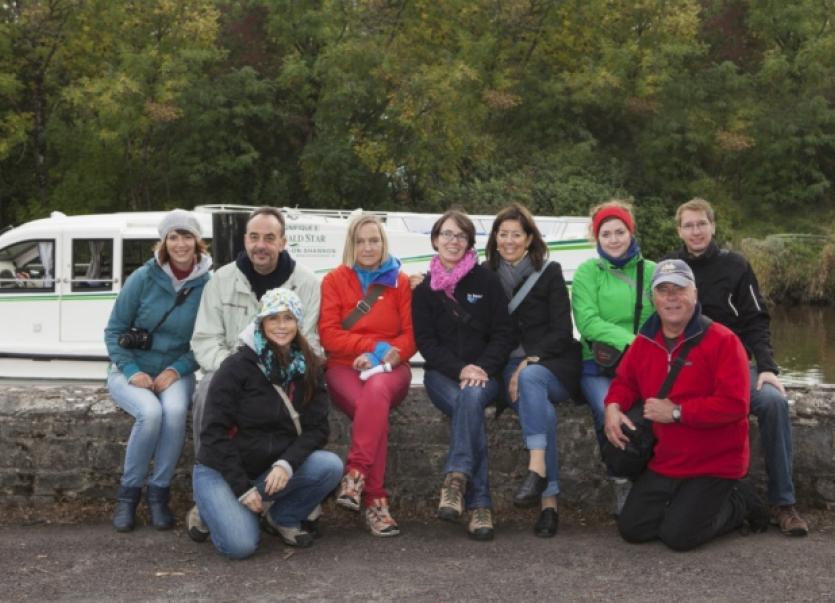 Seven leading journalists from Germany visited Leitrim earlier this week and enjoyed a cruise along the River Shannon, as guests of Tourism Ireland and German cruising tour operator, Le Boat.

Seven leading journalists from Germany visited Leitrim earlier this week and enjoyed a cruise along the River Shannon, as guests of Tourism Ireland and German cruising tour operator, Le Boat.

Representing various print and online publications, with a combined audience of over five million readers the journalists were here to find out more about cruising holidays on the River Shannon, and its tributaries, and to experience at first-hand the spectacular scenery and the wealth of things to see and do in this part of the Ireland.

The group visited Carrick-on-Shannon, where they enjoyed dinner in The Oarsman Bar and Restaurant. Then it was on to Co Roscommon, and Boyle, where they visited Boyle Abbey and Lough Key Forest Park.

They cruised into Leitrim village, where they enjoyed lunch at the Barge Bar, followed by a guided electric bike tour along the Sheemore Trail and fishing on the Shannon Erne Waterway.

The next day, the group travelled in their cruiser along the River Shannon to Keshcarrigan and to Ballinamore, where they visited Ballinamore Golf Course and enjoyed dinner in Smyth’s Bar

“Fact-finding visits like this are very important; they are a really effective way for us to get positive exposure for Ireland through the media in Germany, helping us to showcase the superb tourism experience on offer in this part of Ireland to millions of potential German holidaymakers.”

According to the latest CSO figures, visitor numbers from Germany have grown by almost +12% for June-August this year, when compared with the same three-month period in 2012.

Tourism Ireland undertakes a busy publicity programme around the world each year to raise the profile of the destination. In 2012, there were over 1,400 media visits to the island of Ireland, which helped to generate articles and broadcasts around the globe.