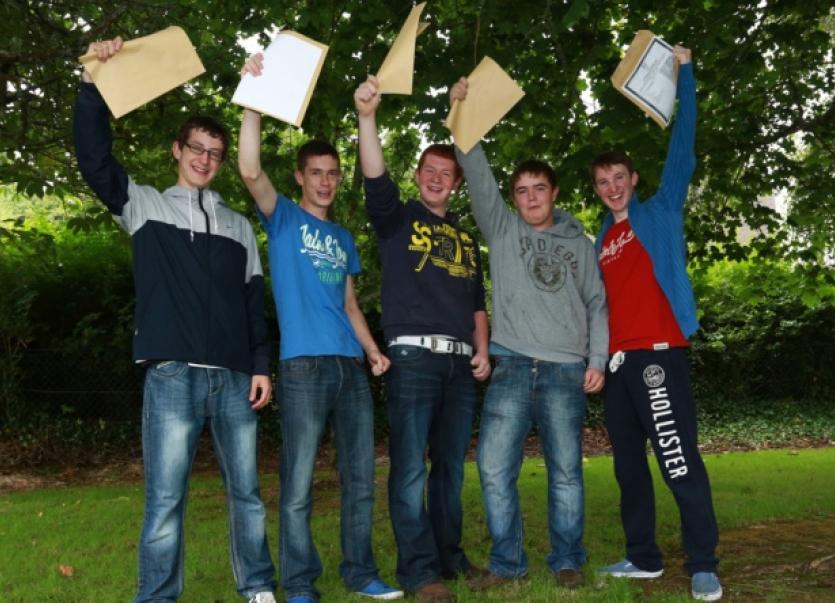 Hundreds of teenagers celebrated last Wednesday after receiving their Leaving Cert results in schools throughout the county. There was a positive response from the various schools with some students hitting the magical top mark of 600 points.

Hundreds of teenagers celebrated last Wednesday after receiving their Leaving Cert results in schools throughout the county. There was a positive response from the various schools with some students hitting the magical top mark of 600 points.

Carrick-on-Shannon Community School Principal, Adrian Jackson said the 90 or so students did very well for themselves and there were a lot of happy faces in the corridors.

He said, “A cursory glance across the results show they exceeded our expectations.” Mr Jackson reminded the students to remember who helped them along the way, their parents, teachers and friends and to acknowledge that and spend a little time with those people.

There were a number of “exceptional results” with one male student reaching the magical 600 point mark. “We’ll acknowledge those results later at an awards ceremony,” Mr Jackson said.

In St. Clare’s Comprehensive, Manorhamilton, Vice Principal, Ceola McGowan said they were extremely pleased with this year’s results and there was great excitement around the school among their 90 students.

One student scored the maximum 600 points and the majority of pupils have fulfilled their potential. She said it was a good day for St. Clare’s and congratulated them and wished them well for the future.

David Harding, Principal of Lough Allen College, Drumkeerin, said they were delighted with what he described as “a great set of results.”

They had 31 students sitting the Leaving Cert this year and he said they had some excellent results especially from students who would have struggled. He said no subject stood out as being exceptional but their results came from across the board.

Mohill Community College Principal, Una Duffy was very happy with the results obtained by her students, with 60 sitting the exams this year. “The results went extremely well, we are very pleased with how everyone has done and the students are very pleased as well.

“We had a very big group sitting the Exams and I am pleased to say that they all did very well. We might not have had a student hit 600 points but we had quite a number in excess of 500 points and although I won’t name names, we did have a good number of those exceed 550 points which is very good.”

The Mohill principal wished the students good luck with their further education. “I just want to commend the students and their teachers on their excellent results and wish the students well for the coming year and years ahead.

“It is a difficult time to maintain the levels of motivation for further education given the economic conditions they country finds itself in at the moment but there will be meaningful options for students in the years ahead.”

It was a hectic morning at Ballinamore Post Primary School as the majority of the 60 students who sat the Leaving Cert exams visited the school for their results.

Principal, Padraig Leyden was “delighted with all the results” and the school was celebrating two students achieving 590 points that morning. Eight pupils from the school got over 500 points.

Mr Leyden told the paper “generally all the students are happy here.” He said Ballinamore PPS had a high take up for higher level subjects across the board. He said there was no visible trend with any subjects. He wished them safe celebrations during the Ballinamore Festival.

Mr Leyden said the majority of the students were all considering going on to third level education and he wished them every success.

Acting Principal of Drumshanbo Vocational School, Sean Wynne, said that the Leaving Cert higher results “were better than expected” this year. He said the students were happy and “those who worked hard and put the work in got the results they wanted.” Mr Wynne said there was a high take up of Higher Level Maths this year for the bonus of 25 points. He also noted that the popularity of the subject of Agricultural Science has resulted in higher standards.

He said many pupils were walking on air today after earning over 500 points. He said every year 40% of Drumshanbo students complete a PLC course after Leaving Certificate exams, and many go on to third level. He wished the students well in their life paths and hopes they all find suitable employment. My Wynne said the students would be celebrating that night, but hoped that the boys in the Minor Final hold off until after the game!

There were ecstatic faces in Carrigallen Vocational School when the Leaving Certificate results were released.

Declan Conboy, Principal congratulated the Leaving Certificate students on the excellent results achieved. He went on to state, “We are delighted with the fantastic results received by our students in Carrigallen Vocational School. The Leaving Certificate Class of 2013 really worked very hard and they were rewarded with the results they achieved in this year’s state examinations, all of our students are confident they will get their first choices on their C.A.O. applications”.

“I would like to take this opportunity to wish all our past students the very best in their future educational careers .

Congratulations also to Leitrim students in schools in neighbouring counties.