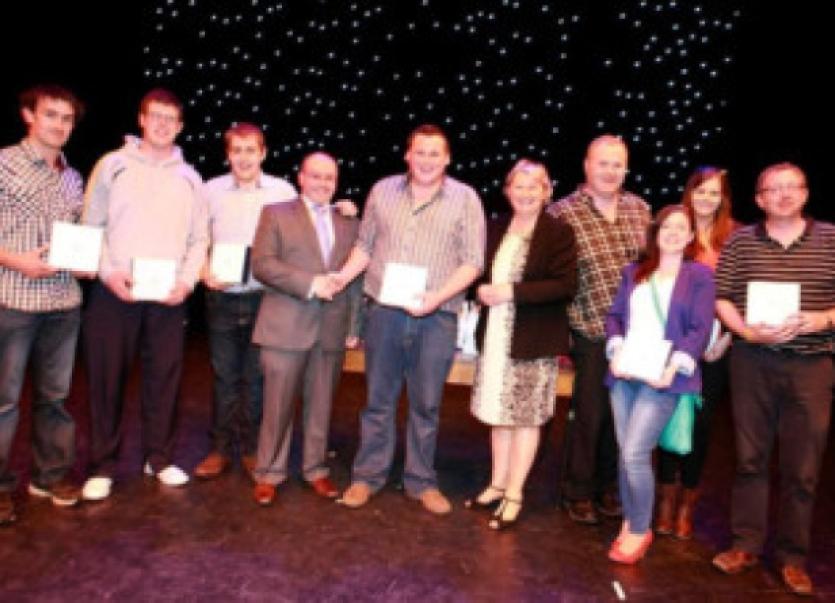 Just like in the very first National Final in the Gaiety Theatre, Dublin in June 1985, Leitrim Macra na Feirme had a night to remember at the 30th National Final which was held in The Solstice Arts Centre, Navan, Co. Meath on 5th July.

Just like in the very first National Final in the Gaiety Theatre, Dublin in June 1985, Leitrim Macra na Feirme had a night to remember at the 30th National Final which was held in The Solstice Arts Centre, Navan, Co. Meath on 5th July.

Twenty Macra clubs from 11 counties were involved in the Final.

In that very first National Final in 1985 Leitrim, remarkably, had the biggest involvement with three different clubs, Fenagh, Aughnasheelin and Drumeela being involved in four events between them. Drumeela, who were also involved in Novelty Act, had the main glory on the night by winning the Pop/Folk/Ballad Group title.

The county had to wait until 1999 for its second National Talent title when Diane Beirne of Cloone Macra won the Solo Singing title in the National Concert Hall. Another long gap of 14 years then followed until the county’s third title was won in last year’s National Final in The Helix Theatre, Dublin when Séamus McWeeney of South Leitrim Macra won Leitrim’s second Solo Singing title.

And so to last Saturday night in the The Solstice Arts Centre South Leitrim Macra were again the county’s standard bearers, this time in the Novelty Act section.

The team of Shane McKeon from Carntulla, Ballinglera, Óisín Barron of Murhaun, Drumshanbo, Shona O’Neill of Corryard Wood, Drumshanbo, Brendan Curran of Gervagh, Mohill, Kevin Reynolds of Carrick Road, Drumshanbo, Marie Doherty of Sheebeg, Keshcarrigan and Ray McCaffrey of Mullinasella, Aughnasheelin got a tremendous audience reaction to their hilarious and brilliantly performed sketch entitled “Selling Miss Daisy”, Miss Daisy being a very realistic but troublesome cow made up of two of the cast members!! One part of the sketch was a scene in which a jeep and trailer (a great prop they had put together) with its driver and passenger was proceeding along a bumpy country road. The reason we knew the road was bumpy was because of the brilliant movement of the two humans and Miss Daisy who were bouncing up and down in harmony and perfect movement. It was hilarious and went down a treat with the audience.

Therefore it was no surprise at the end of the night when the South Leitrim group were announced as winners with Enfield, Co. Meath in second place. The other finalists were Glanmire, Co. Cork and Croom, Co. Limerick.

The South Leitrim group were presented on stage at the end of the night with engraved Dublin Crystal trophies by Macra na Feirme National President Kieran O’Dowd who is of course from neighbouring Sligo.

A fantastic win then for the South Leitrim group and it is great to see Leitrim Macra up there in the spotlight in the 30th National Talent Final after being the most successful club in the very first one.