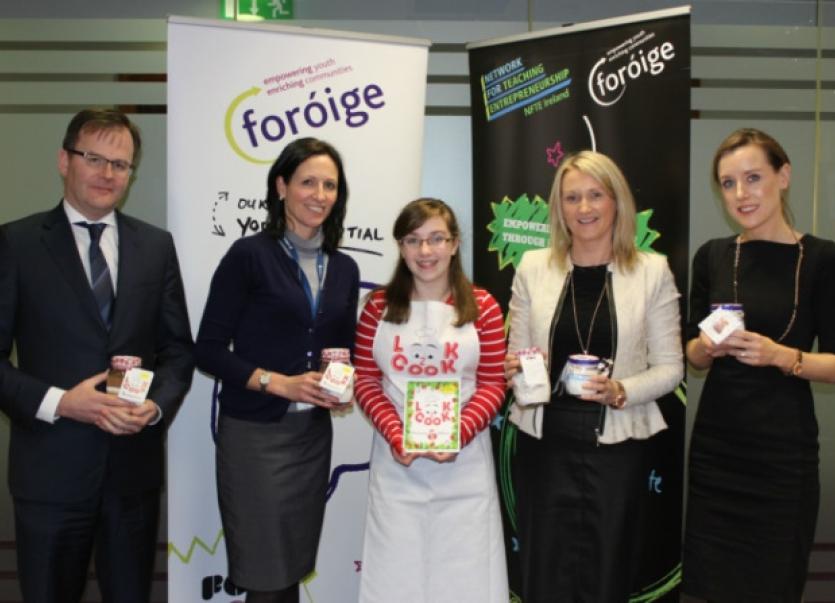 A 14 year-old from Manorhamilton has secured an all expenses-paid trip to New York after winning a hotly contested competition run by Foróige Network for Teaching Entrepreneurship (NFTE).

A 14 year-old from Manorhamilton has secured an all expenses-paid trip to New York after winning a hotly contested competition run by Foróige Network for Teaching Entrepreneurship (NFTE).

Clara Hewston, a second year student from St.Clare’s Comprehensive in Manorhamilton, set up her business – ‘Look 2 Cook’ - a recipe book which uses pictures instead of words – through the Foróige Network for Teaching Entrepreneurship Programme.

For her recipe book business, Clara painstakingly photographed every ingredient for each recipe and then photographed all stages of dish preparation.

Reacting to her win, Clara said: ‘’I can’t believe I’ve won - it’s been such a great experience setting up my own business. I’ve learned so much and my confidence has grown a lot through the programme as I’ve seen first-hand how to create and market a product that I’m really passionate about.”

As a person with learning difficulties, Clara explains that she can finds reading hard sometimes and her recipe book is for anyone in the same situation.

She added: “My product is a cook book with no words and just pictures. People just need to look at the pictures to make a dish. It’s aimed at people who have difficulties with reading. I have learning difficulties and I find reading difficult myself and that’s where I got the idea.”

Seven other businesses reached the finals of the ‘International Business Plan’ competition which was judged by Pat Burke from Grant Thornton, Aoife Campbell from Jazz Pharmaceuticals and Jacqueline McFadden, SMBC

Clara will now represent Ireland at NFTE’s Annual Global Gala which celebrates the power of entrepreneurship education. Clara will get to meet young entrepreneurs from ten other countries when they attend the annual NFTE Gala Awards in New York on March 23rd.