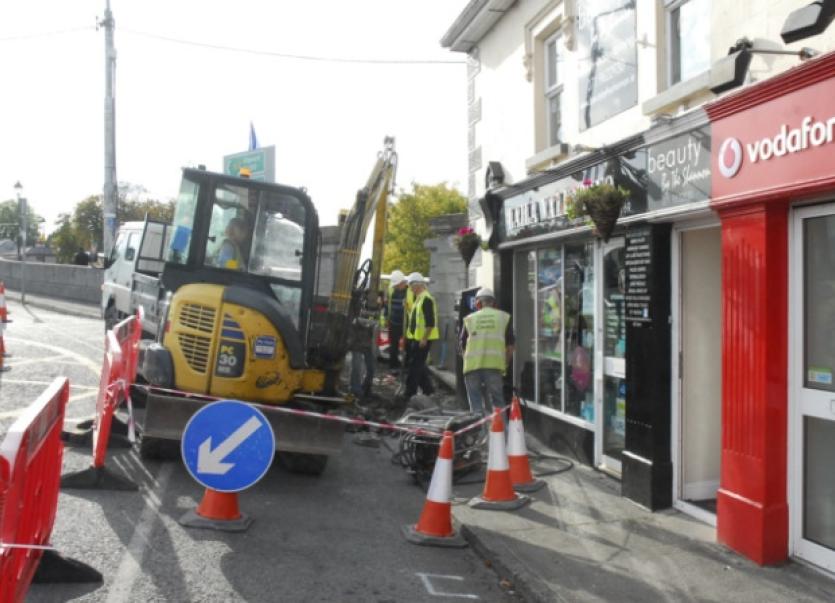 Three businesses on Bridge St, Carrick-on-Shannon have expressed fears about the damage current footpath repairments could have on them.

Three businesses on Bridge St, Carrick-on-Shannon have expressed fears about the damage current footpath repairments could have on them.

Laila Valentino, proprietor of Laila Valentino’s Hairdressing, expressed her concern that the loud noise and strong vibrations associated with the works outside her door are having a very real effect on her business.

Laila revealed she was handed a letter at 4pm on Friday last informing her that works would be commencing on Monday morning. She added when she attempted to contact Leitrim County Council, after she received the letter, the local authority was closed for the weekend.

She has expressed her disappointment that the Council were unwilling to engage in dialogue in order to come to an agreement as to how the works could be carried out, while having the minimum impact on the businesses.

In response to the complaints the local authority issued a statement to the Leitrim Observer saying, “Leitrim County Council is currently carrying out necessary repairs to defective footpaths at this location. Unfortunately the funding available does not permit the carrying out of works outside of normal business hours.

“We discussed the proposed works with all of the affected businesses last week and no issues were raised at that time. We fully recognise that this nature of works invariably causes a level of inconvenience and indeed annoyance.

“Access to business premises will be kept open at all times and Leitrim County Council will continue to make every effort to complete the works in as short a timeframe as possible and to keep the level of disruption to a minimum.”

Laila added she believes the works that are being carried out at the moment will have a detrimental effect on her business as 20% of her trade is ‘walk-in.’

She stated, “People walk past and look in the window and come in, that is how business is created.”

A staff member in Laila Valentino’s explained how the works are impacting on them as she revealed a customer phoned to make an appointment but she struggled to hear what was being said.

Edel Shanley from ‘Beauty by the Shannon’ explained how the works were effecting her saying, “I have to move the treatments into a back room. I understand the work has to be done but I am worried.”

Edel explained the door to her business is always open during business hours but with the level of noise outside her premises she revealed, “I’m concerned if people see the door closed, they’ll think I’m closed.”

Similarly Tooman Bait and Tackle expressed concerns with the effect the work is having on their trade.

An employee told the Leitrim Observer, “Enda Kenny was here last week and asked me how business was. This has killed business, it’s a specialist trade and it relies on passing trade.”

He added, “No thought has gone into it. You can’t blame the lads doing their jobs but why could they not delay it and work after business hours.”

Giving an example of how the disruption had impacted upon the business he revealed, “I’ve had three customers today, that’s it. I may as well not be here because 80% of business is walk-in.

“For example, if a bus of American tourists arrives, they come in and take a few pictures and always buy something to take with them. Out of a coach load of tourists, 10% of them will come in and spend €10, now that’s gone because they can’t get in.”

he described the works as, “Total disrespect to shop owners and the general public,”