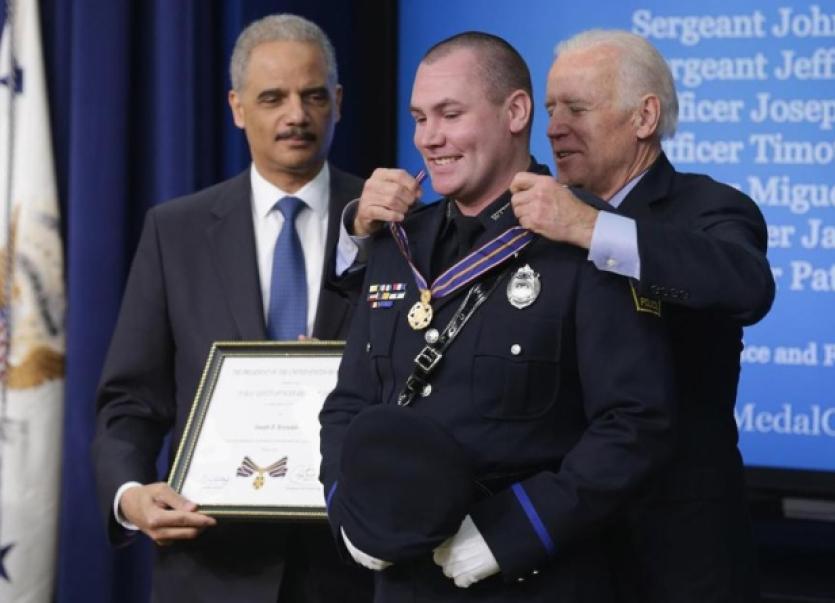 The case of Dzhokhar Tsarnaev, one of the ‘Boston Bombers’, was brought to a conclusion last week when he was found guilty of 30 charges relating to the deaths of three people and injuries to 264 at the 2013 Boston Marathon.

The case of Dzhokhar Tsarnaev, one of the ‘Boston Bombers’, was brought to a conclusion last week when he was found guilty of 30 charges relating to the deaths of three people and injuries to 264 at the 2013 Boston Marathon.

During the trial, the role played by Officer Joseph Reynolds, who has very strong links with Kinlough, Dromod and Carrick-on-Shannon emerged.

Giving evidence to a federal jury Officer Reynolds explained how on April 19, 2013 he located the black Mercedes SUV stolen by the suspects, Dzhokhar and his brother Tamerlan who had evaded detection for four days following the bombing close to the finishing line of the Boston marathon which killed three people.

Having observed the vehicle, Officer Reynolds recounted how he slowed down in order to inspect the licence plate and observed the driver, Tamerlan, the older of the two brothers who were sought in relation to the bombing.

Officer Reynolds recalled, “We locked eyes at each other.”

Having been advised to wait for back-up by a supervisor he was communicating with via radio, Officer Reynolds recalled he remained two car lengths behind the Mercedes before it stopped in the middle of the road.

Continuing his evidence Officer Reynolds said, “Tamerlan got out and began shooting at my cruiser.”

Officer Reynolds ducked, from inside his car, which he put into reverse before shouting into his radio.

He then used his car door as cover before firing back saying he was unable to recall exactly how many times he was shot at.

“All I could see was muzzle flashes. I couldn’t count it. It was nonstop,” he said in evidence.

As the onslaught continued Officer Reynolds recalled, “The shots continued as other officers began to arrive,” adding he saw an object fly through the air before landing in the street and exploding, shaking him to his knees.

“The blast shook me to my knees. My ears were ringing. I could hear all the car alarms going off,” adding, “I could feel all the debris landing on top of me.”

The jury heard Tamerlan Tsarnaev began running towards Officer Reynolds before he was tackled by Sgt. Jeffrey Pugliese. As police officers attempted to handcuff Tamerlan they observed the Mercedes SUV coming straight for them.

The officers dived for cover with the vehicle, driven by Dzhokhar, striking Tamerlan and carrying him in the wheel well for 25 feet.

Tamerlan died as a result of injuries sustained while Dzhokhar was discovered hiding in a boat later that night.

Joseph’s connection to the county was explained by his father, Vincent, whose father Bernard was a member of An Garda Siochana and was stationed in various parts of the county.

Bernard’s 10 children, seven sons and three daughters were all born in either Kinlough or Dromod. Bernard and his family moved to Carrick-on-Shannon after he was stationed there in the early 50’s before emigrating to America in the latter part of that decade.

Many of the Reynolds family, particularly Vincent and his siblings Sean, Bernie, Aiden and Michael are still remembered within the county.