Better deal must be secured for Irish farmers 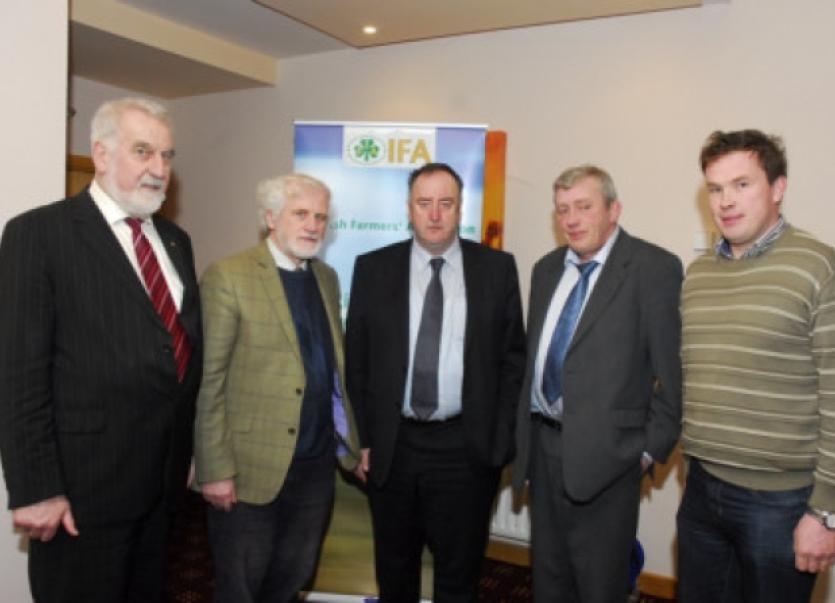 With input costs spiralling and the erosion of payments under Pillar 2 supports, IFA President, John Bryan has said that securing a better deal for Irish farmers must remain the primary focus for the IFA in the coming months.

With input costs spiralling and the erosion of payments under Pillar 2 supports, IFA President, John Bryan has said that securing a better deal for Irish farmers must remain the primary focus for the IFA in the coming months.

In his overview of the industry presented at the Co Leitrim AGM last Thursday he echoed the sentiments of Co Leitrim IFA chairperson, Pat Gilhooley noting that the industry was facing its most challenging time in the months ahead.

Live exports have been key for the cattle sector and with the opening of markets to Libya there was even more potential for sales through this sector.

This demand was also helping to increase cattle prices but Mr Bryan acknowledged that any gains were being offset by increased input and feed costs after the bad weather in 2012.

He urged all farmers to continue to sell through their local marts, especially when exporting to “ensure you are paid for your stock”.

With Ireland’s strong emphasis on traceability and food quality controls, the equine meat scandal hit hard, but Mr Bryan said that quick intervention and “our strong reputation” meant that Ireland had continued to sell to international markets.

“We worked very hard to emphasise the traceability steps we had in place and we worked very quickly to reassure markets and as a result we’ve been able to hold many of the contract we had in place. Every week since this scandal we’re had a steady trade in marts and that has been crucial,” he said.

Noting that there were always “clouds on the horizon” for farmers the IFA said he was concerned over serious talks in the EU on trade deals and it was vital that the IFA continue to work to stop imports from entering the EU market. Although the organisation stopped the tide of Brazilian beef, there were now talks of beef being imported from Canada and the US.

“We don’t want that level of competition in Europe but the problem is that we have strong trade links with he US on technology and we’ve had a clear message from the Taoiseach that he wants a deal to be agreed with the US. The problem is that they have very different standards on beef production that we have here,” he said.

The IFA, he said, was disappointed with Connacht Gold for paying substantially less for milk than Lakelands are paying.

“It’s very important that the same price is paid as the milk is all going into the same market. We are expecting a good rise in milk prices in March and for the rest of year,” he added.

But the central focus of Mr Bryan’s overview of farming was very firmly focused on the state of play in Europe and on ongoing CAP discussions.

“We’ve come from a situation where we have now 27 member states and 12 are new members who want to see themselves getting a bigger share of supports while those member states, like Germany, who put in most of the funds, want to stop contributing as much and are looking towards supporting their own farmers,” he noted.

“There has been over 18 months of debate and we are looking at drop in EU Budget. Ireland are set to see a cut of 3.3% in EU funds.

The IFA President said the Ciolos proposals of flattening and regionalisation would destroy the viability of tens of thousands of productive farmers, and over 2,000 farmers in Co Leitrim would lose some of their SFP payments.

“The flexibilities achieved in Brussels would minimise these losses and Minister Coveney must hold firm and defend his position in discussions with the EU Parliament and Council,” Mr Bryan stressed.

The IFA president said that the organisation is insisting that monies available for redistribution must be targeted at active farmers using objective criteria, such as stocking rates and coupling and he said the IFA was working hard to secure 50:50 co-financing from the Government.

“An annual Budget of over €600m for Pillar 2 would deliver a strong Rural Development Programme, which would include targeted Disadvantaged Area payments, agri-environment and upland schemes,” he said.

He noted the reference year remained an area of concern but this was looking likely to be 2012, however he said that protections would have to be put in place for young farmers who joined the industry after this date to ensure they didn’t lose out.

He said that the IFA would have to be careful in terms of capping farm payments to ensure they weren’t put in place at too low a rate or fragmentation would occur but he also argued that supports should be put in place to assist those farmers on the lowest incomes.

“The thing to remember is that nothing is in the bag yet. I’m asking for your support and I need you to get behind the IFA as we continue negotiations. Nothing is a done deal and the fight continues,” he said.