Contract signed for redevelopment of Rainbow 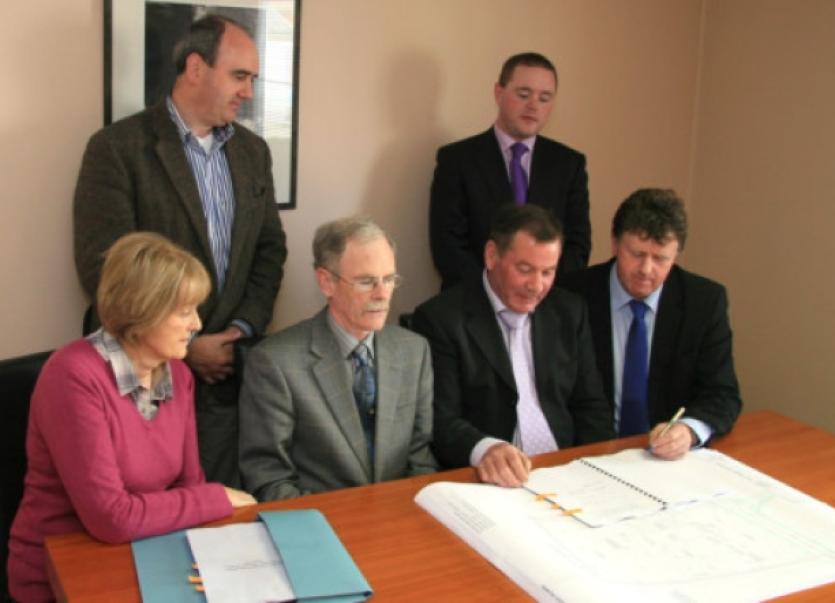 In a momentous occasion for the north Leitrim village of Glenfarne, contracts were signed for the redevelopment works at the iconic Rainbow Ballroom of Romance this week.

In a momentous occasion for the north Leitrim village of Glenfarne, contracts were signed for the redevelopment works at the iconic Rainbow Ballroom of Romance this week.

Work is expected to start on the project which is costing in the region of €600,000 under the leadership of contractor Desmond McDermott from Manorhamilton.

The work will include the provision of new toilets, a new cloakroom and new kitchen and bar facilities. The floor of the dancehall will also be refurbished but it will still retain that renowned ‘bounce’ it became famous for during its hey day. As part of the project the upstairs section of the building will be converted to provide space for a dedicated museum. This will include decades of memorabilia relating to the Ballroom and it is hoped that this will prove a huge draw-card for Glenfarne and the north Leitrim area.

While work is ongoing events planned for the Rainbow will be transferred to the Kiltyclogher Community Centre including the upcoming dance on May 19, featuring music by Country Cousins.

All work is expected to be complete on the redevelopment of the Rainbow by the end of 2013.

Speaking to the Leitrim Observer this week, local County Councillor, Sean McDermott, who also serves as Glenfarne Community Development Trust Chairperson, said that he was delighted that contracts had been signed on the project.

“This is a major boost for Glenfarne and it would not be be possible without the assistance of the Letirim Development Company and the enthusiasm of local volunteers and the wider community,” he acknowledged.

“This is one of the biggest projects funded under LEADER in Co Leitrim and I have no doubt that it will be a major tourism draw when complete.”

Just under half a million euro has been provided for the business plan and construction works through the LEADER programme while a further €75,000 has been raised by the local community and a loan has now been drawn down to meet the balancing amount.